So you know "Pride and Prejudice" and "Sense and Sensibility". What about the other 4 finished works? In which books do the following very minor characters appear or get mentioned? (Based on texts, not films.)

Quiz Answer Key and Fun Facts
1. In which novel is Miss Andrews frequently mentioned by one of Austen's anti-heroines?

Catherine Morland is befriended by the selfish Isabella Thorpe, who later becomes engaged to Catherine's brother. Isabella Thorpe mentions her friend Miss Andrews frequently and in whichever context supports Isabella's point at the given time.
2. Mrs Goddard runs a school. In which novel does one of the characters dwell at the school?

Harriet Smith has an uncertain ancestry which allows Emma to romanticize that Harriet has been deposited at Mrs Goddard's school by a wealthy aristocratic father.
3. Charles Hayter almost loses his prospective wife in which novel?

Charles Hayter is the cousin of the Miss Musgroves, Henrietta and Louisa. Mary Musgrove disapproves of this connection of her in-laws, feeling that the Hayters are beneath her. She encourages Henrietta in her pursuit of Captain Wentworth in order to detach her from Charles Hayter.
4. The short lived Mr. Norris widows his wife early in which novel?

Mrs. Norris, Fanny Price's aunt, is widowed early in the book leaving her plenty of free time to make Fanny's life a misery at Mansfield Park.
5. Mr. Dixon is mentioned with much speculation between two main characters of this novel, including the heroine. Which book?

Jane Fairfax lived with Colonal and Mrs Campbell after she was orphaned. Their daughter marries Mr Dixon. Frank Churchill and Emma speculate that Jane has returned because she has become attached to Mr. Dixon. Emma does not know that Frank Churchill is distracting her from the truth, that he in fact is engaged to Jane Fairfax.
6. Lady Dalrymple is treated with sycophantic regard by proud, vain and arrogant distant relatives in which novel?

Lady Dalrymple sweeps into Bath and has her company courted by the vain Sir Walter and Elizabeth Elliott, who manage to treat all others with disdain. Lady Dalrymple appears not only to accept this treatment but to expect it. A thoroughly revolting crowd altogether.
7. Where does Mr. Yates cause trouble with his theatrical enthusiasm?

Mr Yates comes to Mansfield to visit Tom Bertram and initiates the dramatisation of the play "Lovers Vows". He eventually elopes with Julia Bertram towards the end of the book.
8. Mrs. Churchill never appears but is much mentioned, until her demise allows a marriage in which novel?

Mrs. Churchill is Frank Churchill's aunt and the reason for the secret engagement between Frank Churchill and Jane Fairfax. Her death allows the engagement to become public.
9. Edward Thorpe is brother to two main characters in this novel and is mentioned by his mother with pride as being at Merchant Taylors.

Mrs. Allen (Catherine Morland's hostess) to her great relief finds an acquaintance in Bath in the form of Mrs. Thorpe. Whilst Mrs Allen is more interested in gowns, Mrs. Thorpe lists the achievements of her multiple children.
10. Dick Musgrove is dead before this novel starts and is not much lamented except by his mother. Which novel?

Dick Musgrove is the "worthless" brother of Charles Musgrove and Louisa and Henrietta; he served on board ship with Captain Wentworth. Captain Wentworth's careful references to Dick win him the affection of the elder Mrs Musgrove.
Source: Author ShazParrett 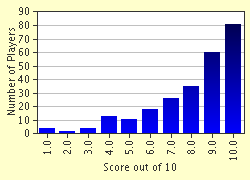 
Other Destinations
Explore Other Quizzes by ShazParrett