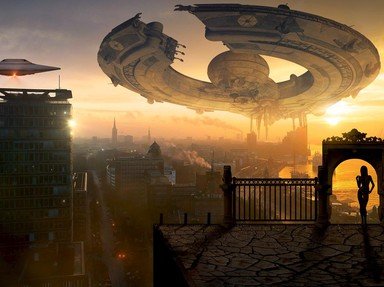 Do You Know Where You're Going To? Quiz

No I don't. I'm lost amid a sea of planets, stars and asteroids, marooned on strange worlds. Please help me find out where I am so I can get home again.

Quiz Answer Key and Fun Facts
1. I'm sure the man said turn right at Rigel 4, then left at the fourth star you come to, and Earth is dead ahead. I must have misheard him, because I'm on this strange planet completely covered in grass. Whose book have I stumbled into?

First published in 1989 "Grass" is typical of Sherri S.Tepper's writing. Her books are often pro feminist, pro ecology and anti male dominated religion, and all of those themes are found here. However, they are not overpowering. The descriptions of the planet, and the way she handles the psychology of the small human enclaves, spread out and isolated in this alien world with strange species, are mesmerising, and the sense of evil permeating the story line makes this one of those books that keep you up to the wee small hours finishing it.
2. Oh no, I've done something wrong again. I took off too quickly, overshot my turning at Beetlejuice, and now, just as I'm landing to find out where I am, I'm eyeball to eyeball with a white dragon with a man on his back. Which world have I managed to find?

The world of "Pern" as created by Anne McCaffrey is an earth-like planet, almost Utopian, but spoilt by a strange rain that comes in cycles and kills everything it comes into contact with, including humans. To combat it humans take a local species, and genetically engineer it into fire breathing dragons that have a telepathic link with their riders.

The "Dragonriders of Pern" series are good, old fashioned, adventure stories set on an alien world. There are heroes and villains, and some of the heroes just happen to be telepathic dragons. Read one and you will want a dragon of your very own.
3. Right, I am determined to do it properly this time. Engines on, drive engaged, lift off. Oops, I forgot to disengage the warp drive; where on earth am I now? Well, obviously not on Earth. A sign in the spaceport says "Welcome to the home planet of Hari Seldon". Where am I?

Originally a trilogy, the series expanded into seven books, all closely linked, covering a span of around 500 years. Although each one can be read in isolation it is better to read them in order, as otherwise a lot of background knowledge will be missing.
4. I must have it right now. I bought a satellite navigation system from this man who said it plots the course to any planet or asteroid you care to name. According to this, one hyper drive jump and I'm on Earth. Only I'm not, I appear to have crash landed on the hidden home world of the Bene Gesserit Sisterhood. Where in the unknown universe am I now?

The "Dune" series of books by Frank Herbert were continued after his death by his son. "Dune" has been hailed as the greatest Science Fiction book ever written. Chapterhouse first appears in "Heretics of Dune" which takes place some 5000 years after the events appearing in "Dune".

It is the main base of operations for the Bene Gesserit Sisterhood, who are gradually changing it into a desert planet, and breeding sand-worms to renew the spice cycle. This will give them complete control of the drug, melange, which is essential for interstellar travel, longevity and, in some people, certain psychic abilities.
5. Undaunted, I launch myself into space again. This time I aim for the furthest star I can see, turn right, then a sharp left round the asteroid belt, and I find myself looking at a turtle floating through space, supporting four elephants who in turn support a world. What have I found?

In Terry Pratchett's "Discworld" series the giant turtle Great A'Tuin swims through space supporting four elephants and a world on his back. The books parody mythology, folklore, fairy tales, modern life and politics, all set on a self contained world where magic is normal and witches are respected, if somewhat feared, members of society. Luggage walks on its own several hundred feet and imps operate cameras and mobile phones. Death talks to you and wants to be human.

The books are always best sellers and each new one is eagerly anticipated.
6. Onward and upwards, or sideways, or downwards, who can tell in space? I am running out of fuel so make a quick pit stop on Alpha Centauri. I know I've read about this planet in a book, but which one?


Answer: Hitchhiker's Guide to The Galaxy

According to Douglas Adams, Alpha Centauri is the nearest planet to Earth, being only 4.1 light years away. It houses a local planning department of the Galactic Hyperspace Planning Council and the biggest duty free shopping mall in the universe. It is also the best place to buy a Pan Galactic Gargle Blaster, a cocktail that burns holes in the floor and which no-one, except Zaphod Beeblebrox, can drink more than three of.
7. I think I have found Earth, there it is, blue and shining in front of me. But when I land it is not my Earth. On this Earth vampires are recognised as people and werewolves walk around freely. A vampire named Jean-Claude suggests I would be happier elsewhere. Whose series of books does he appear in?

Laurell K. Hamilton's "Anita Blake Vampire Hunter" books are set in an alternative world where vampires are legally recognised, run businesses, have their own communities within cities, and interact with werewolves and other were animals. Anita tracks down and slays any vampire who kills humans, solves various supernatural crimes and mysteries, all whilst having a relationship with Jean-Claude, Master Vampire of St Louis, Richard, who is a werewolf, and various other vampires and were people.
8. Having finally arrived on Earth I am determined to stay here, so decide on a one parsec jump along the time continuum to try and find my parallel universe. I arrive in London, but not a London I am familiar with. This is London where it is always 3am. Where am I?

Simon R.Green's series of "Nightside" tales feature private detective Jim Taylor. He works in the Nightside, a hidden part of London where men and supernatural beings work, live and socialise with each other. Jim Taylor however has enemies, and his magic draws them to him, so as well as solving his cases he also has to find out who wants him dead and why, and why he is the catalyst that will decide whether or not Nightside is destroyed.
9. Still no nearer home, so back into space seems to be the only answer. As I fire up the engines I find a note stuck to the steering wheel. "Go to Mars", it says. "Find Valentine Michael Smith, he will guide you home". In which book will I find Valentine Michael Smith?


Answer: Stranger In A Strange Land

"Stranger In A Strange Land" by Robert Heinlein was first published in 1961 and tells the story of Valentine Michael Smith, a human raised by Martians, who returns to Earth when he is a young adult. With themes of sexual freedom, personal liberty and self responsibility, as well as the way organised religion has shaped governments and culture, the book was enthusiastically adopted by the hippie generation.

It became widely known outside of the normal science fiction readership and gained something of a cult status.
10. Finally, I am back on Earth, the real one, not an alternative universe, but I have been away 500 years, and much has changed. We have been invaded by a species called 'Hoots' who use us for transport. As time travel has now been invented I am going to zip back 500 years to my own time, and leave you to answer this. Which book do the 'Hoots' come from?

"The Mount" by Carol Emshwiller looks at a time in the future when we have been invaded. The Hoots are small creatures with weak legs, but very strong weapons. Their legs fit perfectly around our necks, so they decide to keep mankind as a sort of combination of large pet and transport.

The book examines what happens when, instead of rising up in revolution against this as might be expected, we actually start to like being used in this manner.
Source: Author StarStruck60 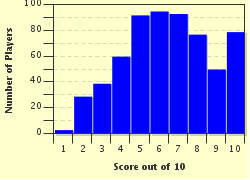