Did I Do That? Trivia Quiz

Did I do that? It might be what the ten ladies in this quiz wondered when they invented something. And their answer probably was: Yes, of course, as if inventing is only a man's job. See what you know about these female pioneers.

Quiz Answer Key and Fun Facts
1. Marie Curie was born in Poland and worked as a chemist and physicist along with her husband Pierre Curie. She would win two Nobel Prizes, for Chemistry and Physics. She is famous for the discovery of the elements radium and polonium. One of her daughters would also go on to win a Nobel Prize. What is the name of this daughter?

Irčne Joliot-Curie was born in 1897 and won the Nobel Prize for Chemistry in 1935, with her husband Frédéric Joliot (who later changed his last name to Joliot-Curie). Their daughter Héléne would become a famous physicist, working in the field of nuclear physics.

Pierre and Marie Curie had another daughter called Eve. She worked as a journalist. In 1937 she published the biography of her mother which was entitled "Madame Curie".

Bronislawa was the name of Marie Curie's sister. She is two years older than Marie. Bronislawa persuaded Marie to join her in Paris, where Marie would study at the famous university of Sorbonne. In Paris Marie would meet her husband Pierre in 1894.
2. Inventing is not something one tends to associate with an actress. Yet actress Hedy Lamarr has an invention to her name. Along with George Antheil she invented a secret communication system, which serves as a basis for the modern spread-spectrum communication technology. In 1953 Lamarr became an American citizen. In which European country was she born?

Hedy Lamarr was born in 1913 in Vienna, the capital of Austria to Jewish parents. Her original name is Hedwig Eva Maria Kiesler. After studying ballet and piano, she went on to become a star in German films as a young girl. She met film producer Louis B. Mayer in London. He persuaded her to change her name to Hedy Lamarr. She would go on to play in several Hollywood films.

She created her invention together with composer George Antheil. They submitted a patent for a secret communications system in 1941. Their idea was first implemented much later in 1962, when the USA used it during a naval blockade of Cuba. It was only in 1997 that the Electronic Frontier Foundation handed Lamarr an award for her work on the system.
3. Grace Hopper is one of the scientists who worked on the Mark I computer by Harvard University. As the story goes, she was at least responsible for making a certain computer term popular. She might even have been the first to use it. Which term is it?

As Grace Hopper was working on the Mark I computer, a moth flew into the system. The system had to be quite literally debugged. At the Smithsonian Institute you can find the remains of the famous moth in the National Museum of American History.

Born in 1906 as Grace Brewster Murray, she studied mathematics and physics. She worked as a professor of mathematics, before joining the Navy Reserve, where she started working on various computer projects.
4. Sybilla Masters is, perhaps, not very well known as an inventor. She invented a way to clean and cure Indian corn. The corn could then be processed into various food products. The patent she received is not her in her name, however. Why did the patent list the name of her husband Thomas?


Answer: Women were not allowed to own patents at the time

Sadly women were not allowed to own patents at the time. The patent was given out in England in 1715. A second patent for weaving straw into hats was also credited to her husband.

Sybilla was truly one of the first American female pioneers. She is the first American woman to be credited with a patent. Sybilla Masters died in 1720, five years after the first patent was issued and was only fully credited for her achievements much later in history.
5. Ruth Wakefield bought a lodge called the Toll House Inn, where she worked with her husband Kenneth. She was originally a dietician and food expert. One day she was baking a batch of cookies and ran out of an ingredient. She experimented a little and came up with a now very famous cookie. What type of cookie did she create?

Ruth was making a batch of chocolate cookies, but ran out of baker's chocolate. She added a few broken pieces of Nestlé chocolate into the batter, expecting it to melt. It did not melt, yet created a whole new type of cookie. She named it the Toll House Crunch Cookie. Other versions of the story insist that some pieces of chocolate accidentally fell into the batter, thus creating the now famous cookie.

Ruth Wakefield was born in 1903 in East Walpole. She was recognised as a good chef and wrote her own cookbook "Toll House Tried and True Recipes".
6. Marjorie Stewart Joyner worked for the Madame Walker company, that created hair products. In her line of work, she came across a lot of African American women who wanted their perm to last longer. She invented a device that curled the hair for a longer period of time. She went on to be the director of several of Madame Walker's beauty schools. At the age of 77 she would acquire a bachelor's degree in another field. Which bachelor's degree did she achieve?

Marjorie Stewart Joyner never really received the credit for her invention. Her employer Madame Walker held the patent for the invention and received the royalties. She would go on to co-found the United Beauty School Owners and Teachers Association. She is credited for being the first African-American woman to hold a patent, although this claim is sometimes being contested.

Marjorie was born in 1896 in Monterey. She studied cosmetology and graduated in 1916 at the A. B. Molar Beauty School in Chicago. She was the first African-American woman to do this. It is at the school where she met her future employer Madame Walker.
7. Bessie Blount is known for inventing a device that allowed amputees to feed themselves. She was working as a physical therapist during World War II and came across a lot of injured soldiers. She received no help from the US government, so she offered the patent for the invention to the government of another country. Which country benefited from Bessie's invention?

Bessie Blount was also a teacher of physical therapy at a hospital in New York. She tried to get help with marketing her invention from the United States' Veteran Administration. When they failed to help her, she offered the patent rights to the French Government, who did see the potential of her invention. Many of the war veterans that were injured and as a result confined to a wheelchair or bed. The device that Bessie created allowed them to feed themselves, which improved their quality of life.

Bessie was born in 1914 in Hickory. Besides working as a physical therapist, she was also a forensic scientist.
8. Bette Nesmith Graham worked as a typist at Texas Bank and Trust. In the early days of electronic typewriters it was hard to correct a mistake. Bette started experimenting and finally invented the typewriter correction fluid. She marketed the fluid as "Liquid Paper". Her son Michael later became a famous musician and producer. What band made him famous between 1965 and 1970?

Michael Nesmith gained fame as a member of The Monkees, a band created for the televison series of the same name. He would go on to be a successful solo artist and producer. He won a Grammy Award in 1981 for Video of the Year, which was awarded for his video Elephant Parts.

His mother Bette, who was born in 1924, gained a lot of money with her invention. She later sold her company to the Gillette Corporation. At her death in 1981, her son Michael inherited half the estate, which was valued at $ 50 million. The other half went to organising a think tank about solving the world's problems.
9. Ruth Handler is famous for creating popular American icon Barbie. She found that teens wanted a doll that could be used to act out their dreams. So she set out to create a three-dimensional doll for that purpose and named it after her daughter Barbara. Barbie's boyfriend was later named after her son. What name was given to her male counterpart?

Barbie's boyfriend was named after Ruth's son Kenneth. This was shortened to Ken.

Ruth Handler was born in 1916 in Denver. She became the president of toy manufacturer Mattel in 1967, a company originally founded by her husband Elliott and his business partner Harold Matson. She was succeeded by Robert E. Eckert.

She is also known for starting a company creating a new, more realistic type of breast prothesis, called "Nearly Me". Ruth Handler survived breast cancer herself.
10. Mary Anderson is not a name people will recognise as the name of an inventor. Yet many motorists today are very happy with her invention. What car-related invention did she come up with?

Mary Anderson is the inventor of the windshield wiper. She noticed in 1903 that streetcar drivers were forced to drive with the window open, when it rained. She then set to making a device that would wipe the window while driving in the rain.

She was born in 1866 in Greener County. She developed real estate and also managed her own cattle ranch and vineyard in the state of Alabama, where she grew up.
Source: Author James25 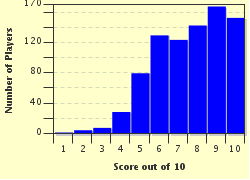 
Other Destinations
Explore Other Quizzes by James25