Robert Duvall has been in more movies nominated for 'Best Picture' than any other star in history (something even he probably does not know). This is more of a celebration than a really picky quiz.

An somewhat prissy Englishman? Way against type. Good film.
2. Duvall was nominated for "The Godfather" and was featured in "The Godfather Part 2". What other 70's mob film did he star in?

An obscure but interesting film about the Chicago mob.
3. Duvall's career tended to parallel that of James Caan. Besides the 'Godfather' films, they starred in three films together. Which was not one of them?

"Countdown" is about a moon exploration. "The Rain People" is a great early Coppola film. "The Killer Elite" is a violent Peckinpaw film in which Duvall pretends to be Caan's friend but in reality tries to kill him. "Rollerball" we all know, but that only featured Caan.
4. In which film did Duvall play a Nazi?


Answer: The Eagle Has Landed

This is about a plot to kill Winston Churchill, and features Michael Caine and Donald Sutherland.
5. Which early film did Duvall have a non-speaking part in although the story pretty much revolved around him?


Answer: To Kill A Mockingbird

He was the misjudged Boo Radley.
6. Duvall was the first person to play which character?

Many people forget that Robert Duvall was in the movie "MASH".
7. In which film did Duvall play Jesse James?

Good western with Cliff Robertson as Cole Younger.
8. What creepy horror film did Robert Duvall make a cameo in?


Answer: Invasion of the Body Snatchers

He plays one of the first to be changed, an eerie priest sitting on a swing.
9. What Coppola film about invasion of privacy did Duvall have a small but significant part in?

Coppola agreed to make "The Godfather Part 2" only if the studio agreed to finance this masterpiece with Gene Hackman. To tell you whom Duvall plays would give the plot away.
10. What is the only film, other than "Godfather 2", that Duvall made with De Niro.

They play brothers, De Niro a priest/Duvall a cop. Incidently, the films nominated for 'Best Picture' featuring Duvall are "To Kill A Mockingbird", "Mash", "The Godfather", "The Conversation", "The Godfather 2", "Network", "Tender Mercies", "Apocalypse Now", "The Seven-Percent Solution", and "The Paper".
Source: Author hank2001 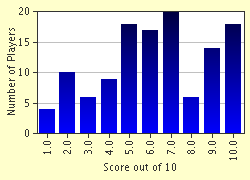 
Other Destinations
Explore Other Quizzes by hank2001