Rush followed up their self-titled debut with "Fly By Night", an album which set the tone for later progressive rock works.

Share on Facebook
Share on Twitter
Share by E-Mail
Author
AESfan
Time
4 mins
Type
Multiple Choice
Quiz #
323,047
Updated
Dec 03 21
# Qns
10
Difficulty
Average
Avg Score
7 / 10
Plays
209
This quiz has 2 formats: you can play it as a or as shown below.
Scroll down to the bottom for the answer key.

John Rutsey left after the creation of their debut album. Rush hired Neil Peart and Peart, along with drumming duties, also wrote many of the lyrics for the album.
2. Which of these songs from "Fly By Night" was not written or co-written by Neil Peart?


Answer: In The End

In the lyric sheet, Geddy Lee is titled "By-Tor" while Alex Lifeson is called "Snow Dog." But what does that make the untitled Neil Peart?
4. Who was "Fly By Night" produced by?

This album marked the first of Rush's long collaboration with producer Terry Brown. The last album to be produced by Terry Brown was 1982's "Signals".
5. What is the longest song on "Fly By Night"?


Answer: By-Tor And The Snow Dog

The 8 minute song tells the story of By-Tor and the Snow Dog. By-Tor is the prince of Hell. By-Tor meets the Snow Dog at the River Styx to fight him (Snow Dog is actually depicted as a dog). The two enemies have a fierce battle in which the Snow Dog eventually wins. The Snow Dog's followers rejoice as By-Tor retreats back to Hell.
By-Tor makes an appearance in another Rush song ("The Necromancer") as the protagonist, even though he is the antagonist in this song.
7. The section of "By-Tor And The Snow Dog" entitled "Of The Battle" consists of four subsections. What is the correct order of these subsections?

The song "By-Tor And The Snow Dog" consists of four different sections. The third section, "Of The Battle", consists of four different sections. "Of The Battle" is the only instrumental section of the song, and depicts the battle between By-Tor and the Snow Dog.
8. What song's lyrics were influenced by the writings of J.R.R. Tolkein?

"Rivendell" is one of two songs to be influenced by Tolkein's writing. The other, "The Necromancer", appears on their next album "Caress Of Steel." Rivendell is Elrond's home in Middle Earth (the setting of Tolkein's books).
9. What song do these lyrics come from? "Though your place in life is where you want to be Don't let them tell you that you owe it all to me"

"Anthem" is the first Rush song to have lyrics influenced by author Ayn Rand.
10. The cover of "Fly By Night" features what?

One of Rush's most artistic album covers, the cover was made by Eraldo Carugati.
Source: Author AESfan

This quiz was reviewed by FunTrivia editor ertrum before going online.
Any errors found in FunTrivia content are routinely corrected through our feedback system.
Most Recent Scores
Jan 17 2023 : Guest 69: 7/10
Dec 18 2022 : Guest 24: 9/10 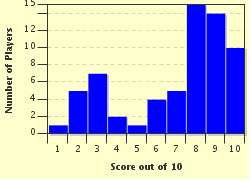 
Other Destinations
Explore Other Quizzes by AESfan