This is about the song "2112" alone, not the rest of the album or anything else Rush-related. The epic more than deserves special attention! Questions 1-10 are mainly about the events in the song, 11-15 about the song itself, and 16-20 are lyrics.

Quiz Answer Key and Fun Facts
1. What type of instrument does the main character (who is also the narrator) find?

The instrument is actually a guitar, though this information is not strictly stated in the song's lyrics; they only say "It's got wires that vibrate, and give music". The main character believes that this can bring a level of freedom to his world.
2. What Temples do the Priests attend?


Answer: The Temples of Syrinx

No reason is given within the song for the name "Syrinx", but the reason for the existence of these temples is to control every aspect of the planets in their Solar Federation. It's a classic totalitarian system, though instead of a secular government (which is never mentioned in-depth), it is symbolically a religious body that controls its people.
3. What is the significance of number "2112" being the title?


Answer: The year it takes place

The song takes place in the year 2112, chosen because it is in the future, and is also a palindrome (meaning it's written the same backwards and forwards). Between now and then it is assumed that a few events had to transpire; especially humans moving and living on other planets, and a totalitarian world government being set up.
4. Who does the main character first go to with the instrument he found?

We hear the waterfall sound because the instrument was found in a cave with a waterfall. The person who finds it picks it up having no clue what it is, but experiments with it to find that it plays music. He quickly realizes its great potential value.
6. What does the oracle in the narrator's dream show him?


Answer: The fate of the Elder Race of Man

According to the main character's dream, the Elder Race of Man is a race which broke off from the dominion of the Temples (either before or after their conception). The Elder Race is free from the totalitarian society and so learns and grows while the Solar Federation becomes stagnant and life loses all meaning.
7. What is the symbol of the Solar Federation (the collection of planets under the control of the Temples)?

The Red Star appears on the front of the 2112 album, and in the "Starman" symbol that has come to represent the band Rush. In the introduction of the Priests, the people are commanded to "hold the Red Star proudly high in hand". But the people under their control have no idea how great life can be with freedom introduced, until our hero finds that freedom for himself.
8. How does the narrator feel about the Priests and the Temples at first, before the events of the song?


Answer: Their benevolent wisdom looks after all life

Like any other resident of the Solar Federation, he does not know anything is wrong until he gets his first taste of freedom by finding his guitar. Ironically, finding freedom only gives him false hope followed by an unbearable existence, while anyone else lives a bleak but satisfactory existence because they can't compare it to any other.
9. According to the oracle in the dream, what does the Elder Race of Man intend to do?


Answer: Tear down the Temples

Possibly the most hopeful moment in the song, as the main character sees the fate of the Elder Race of Man. The oracle shows that they intend to grow their power through freedom, curiosity and creativity, until they can tear down the Temples and return to their rightful home. This would of course also free all the humans in control of the Federation.
10. What is the name of the city in which the main character lives?

The view from the main character's location is of Megadon, his city. The city and sky are both grey, and visually merge into an "unbroken plane". The imagery of this city throws into perspective the bleak and meaningless existence of the people, as seen later when compared to the possible freedom they could have if not for the Temples.
11. There are written paragraphs included with the lyrics to the song that are never actually sung or heard in the song.

Included in the lyrics that come with the record (or CD) are several paragraphs written from the narrator's point of view, in prose. They help better explain a lot of the events in the song as well as the narrator's opinion of them.
12. What is the narrator's name?

The name is never mentioned in the song, the extra paragraphs in the lyrics, nor any outside resources. In fact, the CD version of the album includes the first extra paragraph from the lyrics of the song, quoted in a different part of the booklet. The quote is labeled "anonymous".
13. The song is divided into seven parts, each with its own title. What is the title of the first part?

"Discovery" is the title of the part which comes after "The Temples of Syrinx". It starts with a waterfall sound, as the main character finds, experiments with, and learns to play, his guitar. At the end of "Discovery" he decides to show it to the Priests, which he does in the next part, "Presentation".
15. Who wrote the lyrics to the song?

Neil Peart joined the band as both percussionist and lyricist relatively early in Rush's career. In addition to mastering multiple percussion instruments, he's written nearly all Rush songs after the first album. He often takes inspiration from literature, and such is the case for "2112", which was loosely based on Ayn Rand's novel "Anthem".

If you're wondering who Hugh Syme is, he is a very talented artist who designed the cover of many Rush albums.
16. What is the first line of the song?


Answer: "And the meek shall inherit the Earth..."

This line is not only the first of the song, but also the only line sung in the first song division, "Overture", which is otherwise entirely instrumental. The line comes from an often-quoted passage in the Christian Bible, whose original phrasing is "Blessed are the meek, for they shall inherit the earth."
17. Finish the lyrics: "Look around this world we've made, _________ our stock in trade, come and join the Brotherhood of Man..."

This is from "The Temples of Syrinx", one of the only parts of the song that is not in the point of the view of the narrator. Instead it is from the Priests' point of view, praising their Temples and their way of life. They claim that people are given equality by controlling every aspect of their peoples' lives.
18. What word is missing? "Another _____, that helped destroy, the Elder Race of Man..."

Calling the main character's precious musical instrument a toy is the Priests' way of dismissing his opinion, ideas and worth. The Priests seem to hold the opinion that a lack of total control condemned the Elder Race, but according to the dream and the oracle, it's quite the opposite, and that freedom is what helped them thrive.
19. Which of these lines is correct?


Answer: "I see the hand of man arise, with hungry mind and open eyes"

This is sung during part five, "Oracle: The Dream". After Father Brown crushes the guitar, the main character goes home and dreams of an oracle who shows him the Elder Race of Man. The hungry mind and open eyes represent the different lifestyle of the Elder Race, who use creativity and freedom to learn and grow.
20. What are the last words in the song, and the only words in the seventh part, "Grand Finale"? Each of the two lines are repeated three times in a row, and though they are clearly sung they are not listed in the official lyrics.


Answer: "Attention all planets of the Solar Federation... We have assumed control"

Unlike most of the song, these lines are obviously not from the main character's point of view. The ending, though always open to interpretation, is not a happy one for the main character. His life finishes with absolutely no meaning, no others' lives gain any meaning, nor does the Priests' level of control subside.

The narrator's only hope at the end is: "That with my death I may pass into the world of my dream, and know peace at last."
Source: Author Kwedeth 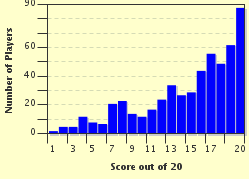 
Other Destinations
Explore Other Quizzes by Kwedeth