Rushing into the "Limelight" Trivia Quiz

The cerebral rock group Rush described life as a successful rock band in its song "Limelight" - but do you remember the words? If you like the quiz, please rate it - if you don't, please let me know why! Thanks!

Quiz Answer Key and Fun Facts
1. In Rush's "Limelight", where is the singer living?

Rush formed in 1968, with Jeff Jones on lead, Alex Lifeson on guitar and John Rutsey on drums. Jones lasted only a couple of weeks; Geddy Lee took over vocals and bass. Rutsey left in 1974 due to his diabetes and a dislike of touring, and was replaced by Neil Peart.

Incidentally, the word 'limelight' comes from the pre-electric days of the theatre, when stage lighting was provided by directing an oxyhydrogen flame at a canister of lime (calcium oxide). Just in case you were wondering...
2. In Rush's "Limelight", the lyricist compares the lifestyle of a rock star to living in what kind of situation?

"In touch with some reality
Beyond the gilded cage."

Rush seemed destined to playing the high school circuit until after failing to elicit support from their record company, they formed their own, Moon Records, and released their first album, "Rush". One song, "Working Man", caught the ear of local DJ Donna Halper, who ensured it received air time.
3. In Rush's "Limelight", the rock star is seen to be "ill-equipped to ___ with insufficient ___"?

In July 1974 the band went on its first US tour, opening for Manfred Mann and Uriah Heep. Peart had taken on the role of principal lyricist, and the 1975 albums "Fly By Night" and "Caress of Steel" showed his interest in fantasy and science-fiction, bringing in the element of 'story-telling' evident in many Rush songs. Neither album was a roaring commercial success, but Rush managed to avoid caving from pressure to make more 'commercial' albums.
4. In Rush's "Limelight", what must one put up "to keep oneself intact"?

"One must put up barriers
To keep oneself intact."

The persistence of Rush won out: 1976's "2112" album went platinum in Canada and reached number 61 in the North America Billboard charts. It also led to their first live album, "All the World's a Stage", recorded in Toronto while on tour for the "2112" album.
5. Rush's "Limelight" advises that to reach one's dream, one must put what aside?

So far, Rush had been fairly true to its British blues roots, with Led Zeppelin, the Who and Cream as major influences. During the following few years, the band became more progressive, adding a synthesizer and more percussion instruments. The songs were still often based on fantasy, with heavy influence by the writer Ayn Rand.
6. Fill in the blank in the lyrics of Rush's "Limelight": "Get on with the fascination, the real ____"

"Get on with the fascination,
The real relation,
The underlying theme."

In 1980, the band took off in a new direction. New musical trends - new wave and reggae - influenced the band, and songs were made shorter to allow radio stations to fit them into the programming. The 1980 album "Permanent Waves" benefitted from this: with more airplay, its sales took it to number five on the US charts. Lyrics also moved from fantasy to society and human matters.
7. In Rush's "Limelight", what type of lens is said to catch the life of the rock star?

"Living in a fisheye lens,
Caught in the camera eye."

The 1981 album "Moving Pictures" went to number three on the Billboard charts, going quadruple platinum, and provided both "Limelight" and "Tom Sawyer", probably the best known of all the band's songs. But Rush was not going to sit on its laurels, nor with a winning formula for hit songs.
8. In Rush's "Limelight", what has the singer no heart to do?

"I have no heart to lie"

Rush's 1982 album "Signals" signalled a new direction for the band: the synthesizers, which had been largely in the background before, took centre stage. Lee, with considerable dexterity, played both bass and keyboards. The band was not happy with the engineering of the album, however, and parted ways with engineer Terry Brown, who had been with the band since its first album.
9. In Rush's "Limelight", who cannot be pretended to be a friend?

"I can't pretend a stranger
Is a long-awaited friend."

Further albums did not garner the same success as those of the early 1980s. By 1989 the band started moving back to its roots, using less electronics while incorporating some new elements, including rap/hip hop and jazz. While songs often displayed the complexity characteristic of much of Rush's works, they were moving back to the rock genre.
10. In Rush's "Limelight", Geddy Lee quotes the words of William Shakespeare: "All the world's indeed a stage, And we are merely players, ___ and portrayers". What word goes in the blank space?

"Living on a lighted stage
Approaches the unreal
For those who think and feel
In touch with some reality
Beyond the gilded cage.

Cast in this unlikely role
Ill-equipped to act
With insufficient tact
One must put up barriers
To keep oneself intact.

Living in a fisheye lens,
Caught in the camera eye.
I have no heart to lie
I can't pretend a stranger
Is a long-awaited friend.

All the world's indeed a stage
And we are merely players:
Performers and portrayers,
Each another's audience
Outside the gilded cage."

In 1997 the band went into hiatus for several years, following the deaths of Peart's wife (cancer) and daughter (car accident). Not until 2001 did the band get back together and in 2002 released its album "Vapor Trails". As of 2008, the band has released 19 studio albums, 8 live albums, 6 compilation albums, 9 video albums, 1 extended play and 76 singles. 3 albums went multi-platinum, 11 platinum and 24 gold, and total worldwide sales of all units is estimated at 40 million. That's a lot of limelight!
Source: Author CariM0952 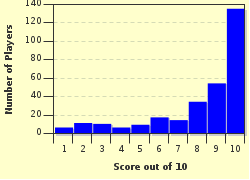 
Other Destinations
Explore Other Quizzes by CariM0952