Every song includes rose(s) in its title. Every artist has done at least one "rose(s)" song. You need to identify either the song or the artist. [HINT: In each correct answer, the song was in the top six of the Billboard Top 100/Hot 100.]

Share on Facebook
Share on Twitter
Share by E-Mail
Author
lowtechmaster
Time
2 mins
Type
Multiple Choice
Quiz #
385,681
Updated
Dec 14 21
# Qns
10
Difficulty
Easy
Avg Score
9 / 10
Plays
715
Awards
Top 35% Quiz
This quiz has 2 formats: you can play it as a or as shown below.
Scroll down to the bottom for the answer key.

Quiz Answer Key and Fun Facts
1. Name the artist who sang "Every Rose Has Its Thorn" in 1988.


Answer: Kiss From A Rose


Answer: (I Never Promised You) A Rose Garden


Answer: Roses Are Red (My Love) 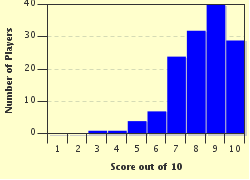 Related Quizzes
This quiz is part of series A Music Mixture:II:

Go to Science and Nature in Songs Quizzes