Can you guess which Green Day member best fits the question?

Quiz Answer Key and Fun Facts
1. His "cat's stuck in the dryer". Who wrote this?

The quote "the cat's stuck in the dryer" is from "Deadbeat Holiday", on the album "Warning". It refers to Billie's cat, Zero, being trapped in the dryer.
2. He has "a kid in New York and a kid in the Bay". Who wrote this?

The quote is from "Rock N Roll Girlfriend", part of the song "Homecoming", from the album "American Idiot".
3. Who said "A turtle does come in its own bowl"?

This was said in an interview during the Frustrators tour in February 2011.
4. Who said "I've never been beaten up! I'm a black belt in Run-Fu."?

It was Tre, during an interview with NME in 2009.
5. Who has played with the Screeching Weasel?

He has also played with Crummy Musicians and Squirtgun. He still has the side-band the Frustrators.
6. Who originally played the violin as a child, before a neighbour introduced him to another instrument?

Tre started playing the violin, but "no noise came out of it that sounded good". His neighbour, Lawerence Livermore, introduced him to the drums.
7. Who owns "Floyd"?

Mike wrote "Ha Ha, You're Dead". It can be found on "Shenanigans", a collection of B-sides.
9. Who is well-known for saying "y'know" a lot during interviews?

Billie Joe released his first single in 1977, at the age of five. It was called "Look for Love" and was written by his dad's friend.
10. About the other tour musicians: who has a band called the Wicked Good?

Jason White appears in the music video for "When I Come Around", long before he started playing with the band on stage. Jeff Matika is a friend of Jason White's, who auditioned to support Green Day on their 21st Century Breakdown tour.
Source: Author BlackGreen7 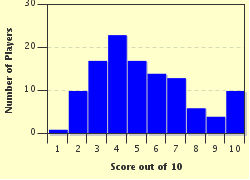 
Other Destinations
Explore Other Quizzes by BlackGreen7