All you Alice Cooper fans, here's an assortment of Alice Cooper questions, guaranteed to make you think. 'Is my head screwed on tight?'

Quiz Answer Key and Fun Facts
1. What is the name of the snake appearing on the cover of the classic 1971 album 'Killer'?

Kachina would be brought out in concert to wrap around Alice's neck during the bands playing of 'Be My Lover'.
2. What song had the phrase 'klaatu barada nikto' in the background?

From the movie 'The Day The Earth Stood Still'.
3. Who was Dwight Fry?

Dwight Frye was actually an actor that played in a lot of old horror movies. Legend has it, he went insane, who knows for sure?
4. From the song 'Public Animal 9' who was not gonna confess, me and........?

G.B. refers to for Glen Buxton, lead guitar player.
5. What movie did Alice NOT appear in?

6. What was the final album with all the members of the original Alice Cooper Band?

The band split because of musical differences.
7. Who was Alice's alter ego on the 'Lace and Whiskey' tour?

This tour had Alice fighting with huge alcohol bottles while battling his own personal battle with alcoholism. Interesting.
8. Who does the world know Alice as?


Answer: The Master of Shock Rock

Mention to anyone in the free world 'THE MASTER OF SHOCK ROCK' and believe me, they definitely know who you are talking about!
9. On 'Feed My Frankenstein' who is the woman that says, 'He's such a psycho...........'

Marilyn Manson could EVER be so lucky to be on an Alice recording. Ha Ha.
10. From 'Brutal Planet' who is the song 'Cold Machines' referring to?

Seriously, he stated in his own words on a foreign interview.
Source: Author kachinafry 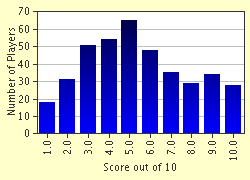 
Other Destinations
Explore Other Quizzes by kachinafry