Here are some some random trivia questions. See how many you can get.

Quiz Answer Key and Fun Facts
1. The song 'Desperado' is written about what rock musician?

In the late 60's the Alice Cooper Band then known as The Nazz was an opening act for the Doors.
2. True or False: Alice Cooper released an album called 'School Days.'

The album 'School Days' consisted of the band's first two albums 'Pretties For You' and 'Easy Action'. And was released by his record company.
3. Alice played what role in the movie 'Sgt. Pepper's Lonely Hearts Club Band'.

Alice sang 'Because' with the Bee Gees.
4. Alice shared a joke with this comedy duo in the song 'King of the Silver Screen'?

From the 'Lace and Whiskey' album.
5. In the song 'It's the Little Things' "If you talk in the movies" what will Alice do?

'It's the Little Things' is from the 'Brutal Planet' CD. And is the first part of Alice's trilogy of albums.
6. In the song 'Pessi-mystic' what channel is Alice watching.

'Triggerman' from 'Dragontown' The second installment of Alice's trilogy. The third part is to be released in 2003.
8. Finish the lyrics and name the famous monster. "She wanted an Einstein. But she got a ____________."

Dee Murrey, and Davy Johnstone of Elton John, and Wings fame play guitar on the 'From The Inside' CD.
10. In what city did Alice get a "job playing Santa"?

From 'No Mans Land' on the 'Dada' CD. "Got a job in Atlanta. In a mall playing Santa. Not because of any talent. But because I was the only one the suit would fit."
Source: Author dave60 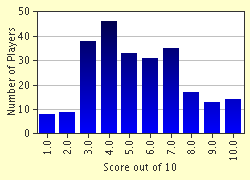 
Other Destinations
Explore Other Quizzes by dave60