Quiz Answer Key and Fun Facts
1. "Working Man Blues", "Silver Wings", and "Going Where the Lonely Go" are all songs from what great artist?

2. What Barbara Mandrell song started off with, "Hello baby, I'm sorry I said the things I said"?

3. Which song is not a Conway Twitty and Loretta Lynn duet?

Gene Autry was also an actor as well as a singer.
5. Who had great success with songs like "Cattle Call", "Bouquet of Roses", and "Make the World Go Away"?

Eddy Arnold re-recorded "Cattle Call" as a duet with LeAnn Rimes for her debut album.
6. Who teamed with Willie Nelson to record "Good Hearted Woman"?

Waylon Jennings sang the theme song for the Dukes of Hazzard tv show.
7. On August 8, 1975 what singer suffered a near-fatal fall while mountain climbing in Montana?

8. What song was regarded as the first million-selling record by a female artist?


Answer: I Wanna be a Cowboy's Sweetheart

K.T. started her singing career late in life. She was in her 40s. She has also done some acting in her career.
10. What song was the band Alabama's first number one hit?

11. Trisha Yearwood's hit "She's in Love with the Boy" hit no.1 in Aug. 1991 making her the first female since who to top the charts with a debut single?

Marie Osmond scored her number one debut single in 1973 at the age of thirteen. The song was "Paper Roses".
12. Who was the Dolly Parton penned song "I Will Always Love You" written for?

Dolly worked on Porter's show. They were having some problems. A while later Dolly was leaving the show and decided to write the song to let Porter know how she felt about him.
13. Dolly Parton and Tammy Wynette made up two thirds of the 'Honytonk Angels' recorded album. Who was the third female to round out the trio?

Loretta Lynn says there are more verses to her signature song 'Coalminers Daughter' that she hopes to record one day.
14. Who had a huge hit with the song 'The Battle of New Orleans' in 1959?

15. Who was the first female country singer to ever win a grammy? 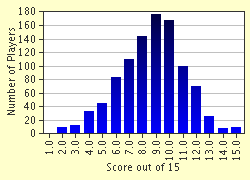 
Other Destinations
Explore Other Quizzes by Ashleywy