I have chosen ten songs by female singers. All are within the top ten, some number ones ... enjoy!

Quiz Answer Key and Fun Facts
1. A "picture" is worth a thousand words, so she "had it blown up life size". Do you remember the one word song title (by a singer who also goes by one name)?

Sylvia's "Snapshot" hit the country charts at number five in 1983, still one of her most recognized songs.

1982 - Female Vocalist of the Year by the Academy of Country Music
1983 - Billboard's Number One Country Female Artist
2. Below is the chorus from a 1988 number one hit. Which is the correct song title from the choices below? "I'll always come back, baby to you I'll always run back, straight to you I'll never get too far away from you I'll never get too lost that I can't be found And I'm never gonna swim too far out I might drown And I'll always come back, come back baby to you"

Born May 1942 in Arkansas, Oslin underwent by-pass surgery in 1995. Retired from road touring, she resides in Nashville, TN.
3. Which of the following ladies sang this 1985 number one country hit? "My heart just can't wait I can't think straight I want to be with you all the time You make me want you You make me want to make you mine"

This song is from her fifth studio album, "Old Flame".

Singer, songwriter, guitarist Juice Newton, is from Lakehurst, New Jersy (1952). From her 38 singles released, six charted number one.
4. Roseanne Cash sang these words in which one of her following number one hits? "Just when I think that I can make it without you You come round and say you want me now You tell me don't leave and I want to believe you Why can't you see just how much I need you"


Answer: I Don't Know Why You Don't Want Me

From her fifth studio album "Rhythm & Romance", this 1985 number one song won her a Grammy that year for Best Female Country Performance. It was composed by Cash and Rodney Crowell, her husband at the time.
5. Of the below sets of words, which complete the ending to this chorus? "Somebody's gonna give you a lesson in hurtin' Somebody's gonna leave you with your fire burnin' With no way to put it out Baby, there ain't no doubt You're a _______________________"

This 1980 song, "A Lesson in Leavin" was Dottie West's first number one solo hit, from her 23rd studio album "Special Delivery".

The oldest of ten, Dorothy Marie Marsh born October 1932 in McMinnville, TN, died September 1991 from internal injuries sustained five days earlier in a car accident; she was on her way to perform at the Grand Ole Opry.

Highway 56 in McMinnville has been named in her honor, Dottie West Memorial Highway.
6. In Lacy J. Dalton's "16th Avenue", the specific city is not part of the lyrics, but do you know what city she is referring to?

"'Cause one time someone told them
About a friend of a friend they knew
Who owns, you know, a studio
On 16th Avenue"

From 1982, this song had a number seven spot on the country charts, from her fifth studio album "16th Avenue".

This song reflects on the countless number of singers, musicians, etc., pursuing a dream in Nashville, that only a few will be fortunate enough to realize.
7. The word Crystal Gayle uses to complete this line is which of the following? "And I... See it in your eyes,_______ Each time we meet... And I... Sense somethin' movin' Underneath our feet"

From 1983, the song "Our Love Is On The Faultline", went to number one for Gayle, from her "True Love" album.

In 2008, Gayle was inducted into the Kentucky Music Hall of Fame and in 2009, she was given a star on the Hollywood Walk of Fame, near the star of her sister, Loretta Lynn.
8. "But whatever you do be wise enough, not to fall in love" Janie Fricke is offering a little woman to woman advice in which of the songs listed below?

This song, her third number one, claimed a number one spot on the country charts in 1983, from her "It Ain't Easy" album.


Answer: She's got a radio heart

"Radio Heart" from 1985, Charly McClain's second number one hit as a solo artist, spent fourteen weeks on the country chart (one week at number one).
10. From 1987, which of the following country ladies covered the 1967 Bob Dylan song "I'll Be Your Baby Tonight"?

"Close your eyes, close the door,
You don't have to worry any more
I'll be your baby tonight"

"Shut the light, shut the shade,
You don't have to be afraid
I'll be your baby tonight"

This was a number five song for Judy Rodman, from her second studio album "A Place Called Love".

She was awarded Top New Female Vocalist in 1985 from the Academy of Country Music.
Source: Author annanne 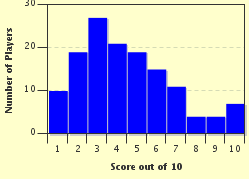