This quiz tests your basic knowledge of classic country music.

Quiz Answer Key and Fun Facts
1. In 1952, she was the first woman to hit number one on the country music chart with her single "It Wasn't God Who Made Honky Tonk Angels."

The single was considered controversial at the time and was initially banned from the Grand Ole Opry.
2. She often sings about her modest upbringing in Tennessee, where she was one of 12 children living with her parents in a one-room cabin.

When Dolly Parton was born, her father paid the doctor who delivered her with a bag of oatmeal.
3. The Grand Ole Opry is a giant country music venue located in which city?

The Grand Ole Opry was founded in 1925 and was originally located on the fifth floor of an insurance company building.
4. This early American country singer combined a 12-bar blues format with his signature yodel. Because of this, he was known as the "blue yodeler".

His 1930 recording of "Blue Yodel No. 9" featured Louis Armstrong on the trumpet and Louis' wife Lil Hardin Armstrong on the piano.
5. Country singers Buck Owens and Roy Clark co-hosted this variety show that aired from 1969 to 1992.

"Hee Haw", as well as "The Beverly Hillbillies" and "Green Acres", was dropped by CBS in 1971 as part of the network's "rural purge".
6. The lyrics to this Merle Haggard song go, "I turned 21 in prison doin' life without parole."

Although not completely autobiographical, this song focused on the pain and suffering Haggard caused his mother while being locked up in San Quentin.
7. In 1950, he reached the top of the country charts twice with "If You've Got the Money (I've Got the Time)" and "I Love You a Thousand Ways".

In 1977, Willie Nelson dedicated an album to Frizzell entitled "To Lefty From Willie".
8. In a 1990 60-minutes interview, Hillary Clinton said that she "wasn't some little woman 'standing by my man'." Which country music singer was she referring to?

Wynette's classic song, "Stand By Your Man" was criticized by the feminist movement of the 1970s who claimed that the song encouraged women to be subservient to their husbands.
9. In 1970, Johnny Cash and June Carter Cash won a Grammy for best country duet for which song?


Answer: If I Were a Carpenter

The couple also won a Grammy for best country duet in 1968 for their song "Jackson".
10. Who was not involved in the "Million Dollar Quartet"?

Elvis Presley also joined this impromptu recording session when he arrived with his girlfriend to pay a casual visit.
Source: Author knope 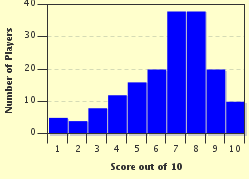 
Other Destinations
Explore Other Quizzes by knope