How Classic Can You Go? Trivia Quiz

In my quiz, you do not need to see how low you can go; all you do is see how classic you can go with these country songs. I will give you a verse or a chorus, and you guess the name of the vintage songs.

Quiz Answer Key and Fun Facts
1. From which song would you hear the following lyrics: "Through winter, the springtime, the summer and fall The moonlight, the starlight, she outshines them all In a world filled with fear, with pain and such harm My sunshine can be so warm"?


Answer: All for the Love of Sunshine

Mike Curb wrote the song, "All for the Love of Sunshine" (1970). Hank Williams, Jr. released it on the MGM label, and it became his first number one single on the Billboard Magazine Charts. Born Randall Hank Williams on May 26, 1949 in Shreveport, Louisiana, Hank Jr. emerged from the shadows of his famous late father, Hank Williams Sr., with his own rebellious approach of singing and songwriting. "Kelly's Heroes", featured the song in its 1970 war movie.
2. From which song would this recitation be taken: "Oh, we had a lot of things to talk about And buddy, I felt like a king And now we've just pulled back on old 66 And he handled that rig better than any gear-jammer I'd ever seen"?

Woodrow Wilson (Red) Sovine was born in Charleston, West Virginia on July 17, 1918. He joined the famed, Louisiana Hayride show in 1949. In addition to his enormous hit with "Giddyup, Go" (1966), Sovine recorded numerous other tear-jerking hits. He was primarily popular for his truck driving music all over the country. Two of his better-known hits were, "Phantom 309", (1967), and "Teddy Bear" (1976).

After an accident while driving in Nashville, Tennessee, Red suffered a heart attack and died on April 4, 1980.
3. What song was made popular with the lyrics below: "Cause Clifton Clowers has a pretty young daughter And he's mighty handy with a gun and a knife"?

Claude King was born in the small town of Keithville, Louisiana, on February 5, 1923. He became a member of the Louisiana Hayride that was produced in Shreveport, Louisiana, not far from his hometown. "Wolverton Mountain", was written by the popular songwriter, Merle Kilgore and co-written by King.

After being rejected by artists, Johnny Horton and George Jones, King recorded the ballad in 1962. It became an instant hit, and stayed at number one for nine weeks on the Billboard Country Charts. Kilgore and King's song took true form because it was written regarding the actual theme of the song. Clifton Clowers, the legend in the song, lived in Arkansas.
4. Which song was scored a number one hit that included the lyrics given below: "God knows his dream would shatter If he knew the devil had me and won't set me free While I'm puttin' on my makeup I'm puttin' on the one that really loves me"?

Distinguished as one of the most successful females in the business, Barbara Ann Mandrell was born December 25, 1948, in Houston Texas. She bombarded the 70's and 80's with her all-time hits, shows, and awards. Her advancement in her career first came with the 1973 hit single, "The Midnight Oil". Recorded on her "Ultimate Collection" CD, it was recognized as one of the greatest cheating songs in country music. Barbara and her two children were involved in a severe car accident on September 11, 1984, but she made a comeback a year later and recorded quite a few more hits before leaving the music industry. Note of interest: At the age of thirteen, Barbara played steel guitar for the renowned country singer, Patsy Cline.
5. Which song did Connie Smith record these lyrics in 1963: "I'm so glad that I'm not like a girl I knew one time She lost the one she loved, then slowly lost her mind She sat around and cried her life away"? What is the name of her only hit song?


Answer: Once a Day

Connie Smith, as she was known in the music business, was born Constance June Meador, on August 14, 1941, in Elkhart, Indiana. "Once a Day" (1963), was written by a prominent Nashville singer and songwriter, Bill Anderson. Smith became an overnight sensation with the only number one single hit of her career.

It topped the Billboard Country Charts for eight weeks. In 1997, Connie married, long-time country and 'rock-a-billy' performer, Marty Stuart, on his native Choctaw reservation near Philadelphia, Mississippi.
6. Which song would you hear these lyrics in: "We'll take each other, from this day forward Together in sickness or health United with love we'll face life together If we're poor or if we have wealth For better or worse, you'll always come first And no one can keep us apart Yes, we take each other, forsaking all others Together, 'till death do us part"?

A major Nashville songwriter, Billy Sherrill wrote, "The Ceremony" (1972) as a duet for George Jones and Tammy Wynette. Tammy was born in Itawamba County, near Tremont, Mississippi as, Virginia Wynette Pugh on May 5, 1942. George Glenn Jones was born September 12, 1931, in Texas, and was raised in the eastern town of Vidor.

As individuals, each held an abundance of hits, but together, they were invincible as a duet, being affirmed as country music's "first couple". George and Tammy were married in 1969, but divorced in 1975.

After having multiple health issues, Tammy died in her sleep, on April 6, 1998, at the age of 55.
7. These lyrics were recorded in a song and became a number one hit. What song would you hear: "Daddy hates mommy and mommy hates dad Last night you should've heard the fight they had It gave little sister another bad dream She woke us all up with a terrible scream"?

Henson Cargill, born February 5, 1941, in Oklahoma, made Jack Moran and Glenn Tubb's song, "Skip a Rope" (1968), famous. The song became such a countrywide success that it spent five weeks on the country charts at number one. It also made the Top 25 on the Pop charts as well.

After he retired from the music industry, he returned to Oklahoma City. He died on March 24, 2007, during surgery, at the age of sixty-six.
8. In which song would you hear Porter Wagoner recite the tear-jerking lyrics: "One day in the summer, we took some flowers To place on some old family graves Jeannie said, "Mommy, ain't it dark in the ground Oh, Daddy, I'd be so afraid Then she looked up at her daddy and me And said somethin' that broke both our hearts She said, "When I die, please don't bury me"?


Answer: Jeannie's Afraid of the Dark

"Jeannie's Afraid of the Dark" (1968), was written by Dolly Parton and performed with her duet partner, Porter Wagoner. The multi-winner of numerous awards, Dolly Rebecca Parton, was born January 19, 1946, in Sevierville, Tennessee. Dolly has contributed much regarding all aspects in life.

In the history of country music, Dolly has held the record as being the most successful female artist. Porter Wayne Wagoner was born on Poplar's Bluff, in eastern Missouri, August 12, 1927. He provided Dolly with her big break in the country music industry by allowing her to appear as a weekly guest on his popular syndicated television show from 1967-1974. During these years, Porter and Dolly both advanced in their careers with individual hits, and singing as a double-act. Suffering from lung cancer, Porter died on October 28, 2007, with his long-time friend and music partner, Dolly, at his side.
9. The recitation below can be heard spoken in which song: "You know, I don't understand every thing I'm readin' here About what's wrong with America But when you don't have a lotta book learnin' I guess there's a lotta things you don't understand But let me say this God, she's like a mother to me And all I am, or ever hoped to be, I owe to you and to her"?

The lyrics to the chorus are, "God bless America again. You know all the trouble that she's in. Wash her pretty face, dry her eyes and then, God bless America again". Conway Twitty and Loretta Lynn recorded the patriotic tune, "God Bless America Again" (1972), written by country artist, Bobby Bare and his co-writer, Boyce Hawkins. Loretta Lynn was born as Loretta Webb on April 14, 1935, in the hollows of Johnson County, Kentucky. Conway Twitty, (name derived from, Conway, Arkansas and Twitty, Texas), was born as Harold Lloyd Jenkins, September 1, 1933, in the small delta town of Friars Point, Mississippi. Together, he and Loretta released their first hit in 1971.

In 1959, Australian native, Geoff Mack originally wrote, "I've Been Everywhere", using places from his homeland of Australia. In 1962, with permission, Hank Snow rearranged the lyrics and changed them to match U.S. and Canadian towns. By altering the words, it became Snow's signature song. Clarence Eugene (Hank) Snow was born on May 9, 1914 in Brooklyn, Queens County, Nova Scotia, Canada. He died in his Madison, Tennessee ranch home on December 20, 1999, at the age of 85. Other country artists who recorded Snow's arrangement, were Lynn Anderson (1970), and Johnny Cash (1996). In 1966, John Hore, also known as, John Grenell, also re-wrote the song and used New Zealand names. To view all three versions of the song go to, http://en.wikipedia.org/wiki/I've_Been_Everywhere. 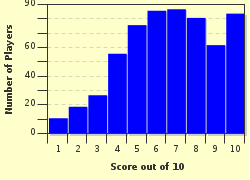 
Other Destinations
Explore Other Quizzes by lilady