The Beatles covered this one!
2. Who sang "Rock Island Line"?

Bobby Darin sang this one on his early TV appearances.
3. Who sang "Six Days on the Road"?

Because of his role as one of the founders of "Trucker Country", he was given an honorary Teamster card and membership.
4. Who had a big hit with "Hello Walls"?

Faron sang it, but Willie Nelson wrote it.
5. Kentucky native Bill Monroe had a band from which is derived the name of a seperate genre of county music...What was the band named?

One of his more popular songs, "Blue Moon of Kentucky", was covered by Elvis, prompting Monroe to rework the original version of the song to sound more like Elvis' version.
6. Who sang "Mama Tried"?

As per the lyrics, Merle really did turn 21 in prison.
7. What was the name of the band that backed up Western Swing pioneer Bob Wills?

Tony Bennett recorded a version of this one.
9. Who sang "Don't Worry about Me"?

Leann Rimes sang this one on "Star Search".
10. Who's "Proud to Be a Coal Miner's Daughter"? 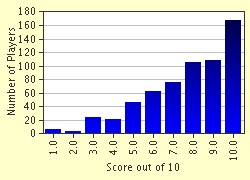 
Other Destinations
Explore Other Quizzes by zippy717