A short quiz on the first half of the album "Tommy" by The Who. All questions refer soley to the album.

Quiz Answer Key and Fun Facts
1. "Tommy" is considered to fall into what category of music?

"Tommy" is considered an opera because it tells a story. There is also a movie based upon it and featuring songs from the album.
2. Why is Tommy's father absent at his birth?


Answer: He is missing in action.

"Believe him missing
With a number of men.
Don't expect
To see him again."
3. After witnessing a murder(in which his mother takes part), Tommy becomes deaf, dumb and blind. What happens to Tommy that helps this process along?


Answer: He is told that he never witnessed the event.

"You didn't hear it.
You didn't see it.
You won't say nothing to no-one
ever in your life."

In the background of these lines Tommy can be heard protesting that he did see and hear it.
4. During which song does the murder take place?

"1951" is from the movie version. On the album, the lyrics "Got a feeling 21 is gonna be a good year" are repeated.
5. In the song "Christmas", what is threatened by Tommy's illness?

Most of these options where probably threatened, but the lyrics only mention the threat towards his soul.
6. Cousin Kevin finds many ways to entertain himself while alone with Tommy, which of these is NOT one of them?


Answer: Spraying Tommy with a hose.

In the film version Cousin Kevin is pictured spraying Tommy with the hose. However a hose is not mentioned in the album.
7. What substance is Gypsy related to?

She's the acid queen.(Pay her before she starts!)
8. What is the name of Tommy's uncle?

"I'm your wicked uncle Ernie."
9. Despite his disability, at what does Tommy excel?

He is a "Pin-ball Wizard"! Perhaps "Tommy's" most well known song. Tommys aptitude in Pinball begins to emerge early in the song
"Christmas".
10. What information does the doctor provide?


Answer: Tommy's condition is not physical.

The docter makes reference to Tommy's "inner block" ("You won't say nothin to no one ever in your life you never heard it! How absurd it all seems; Without any proof!" likely had something to do with this.)
Source: Author lothweneriniel 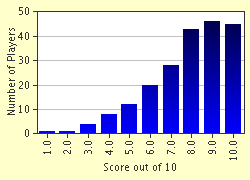 Related Quizzes
1. Lyrics of The Who Easier
2. Song by Song: "My Generation" Easier
3. Albums and Songs of The Who Easier
4. The Who Album Match Easier
5. A Who Quiz for Who Fans Average
6. The Who "In Other Words" Average
7. Who's Greatest Lyrics Average
8. Well known Who songs Average
9. The Who Lyrics I Average
10. The Who Sell Out Average
11. Hope I Die Before I Get Old Average
12. Who Are You? Average


Other Destinations
Explore Other Quizzes by lothweneriniel