A Who Quiz for Who Fans

10 questions about the loudest rock band of all time.

Quiz Answer Key and Fun Facts
1. During their prime in the late 1960's and 1970s, The Who consisted of four members: Roger Daltrey, John Entwistle, Keith Moon, and Pete Townshend.

Although some of them were capable on multiple instruments, the basic line-up was: Pete Townshend on guitar, John Entwistle on bass, Keith Moon on Drums, and Roger Daltrey on lead vocals. In later years, they appeared on stage with multiple guitarists, percussionists and small orchestras behind them.
2. Who was the first member of The Who to die?

He died of an overdose in 1978. Ironically, the drug that killed him was prescribed to help him overcome alcoholism.
3. Who was the second member of The Who to die?

He died in 2002, the night before the band was to launch a U.S. tour.
4. All of the band members are from Liverpool, England.

They all hail from London. Liverpool is famous for producing The Beatles.
5. How many of The Who's songs reached #1 in the U.S?

Amazingly, The Who never reached #1 in the U.S.
6. What was Pete Townshend famous for doing to his guitars during live shows?

As far as I know, Pete only smashed his guitars. Jimi Hendrix lit his guitar on fire at the Monterrey Pop Festival.
7. Which of the following does not describe the band, as depicted on album covers?


Answer: The band dressed as beefeaters at the Tower of London

John Entwhistle illustrated the connect-the-dots cover of "The Who By Numbers"; they donned football helmets for "Odds & Sods"; and they appeared in the mirrors of the scooter on "Quadrophenia".
8. The last studio album The Who recorded with Keith on drums was "It's Hard."

Keith's last album was "Who Are You." Some fans find it poignant that on the album cover, Keith is sitting in a chair marked "NOT TO BE TAKEN AWAY."
9. Which member of the Who played the title role in the movie "Tommy"?

Pete, John and Keith appeared as themselves during the pinball scene, playing the band for Elton John who sang "Pinball Wizard". Roger played Tommy. As well, Keith played the part of Uncle Ernie.
10. Finish the song title: "Boris the ______."

"Boris the Spider" was written by John Entwistle, one of the few hits not by Pete Townshend.
Source: Author poppersmoke 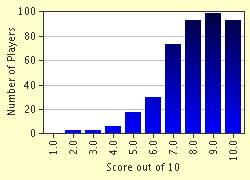 Related Quizzes
1. Lyrics of The Who Easier
2. Song by Song: "My Generation" Easier
3. Albums and Songs of The Who Easier
4. The Who Album Match Easier
5. The Who "In Other Words" Average
6. Deaf Dumb and Blind Average
7. Who's Greatest Lyrics Average
8. Well known Who songs Average
9. The Who Lyrics I Average
10. Hope I Die Before I Get Old Average
11. The Who Sell Out Average
12. Who Are You? Average


Other Destinations
Explore Other Quizzes by poppersmoke