Easy Music Trivia: Lyrics of The Who | 10 Questions

Here are some questions about songs from The Who. All songs written by Pete Townshend.

Share on Facebook
Share on Twitter
Share by E-Mail
Author
mex
Time
3 mins
Type
Multiple Choice
Quiz #
311,827
Updated
Dec 03 21
# Qns
10
Difficulty
Easy
Avg Score
9 / 10
Plays
619
This quiz has 2 formats: you can play it as a or as shown below.
Scroll down to the bottom for the answer key.

Quiz Answer Key and Fun Facts
1. What song is the lyric from? "If I swallow anything evil Put your finger down my throat If I shiver, please give me a blanket Keep me warm, let me wear your coat"

"Behind Blue Eyes". This song was released on the 1971 album "Who's Next".
2. What song is the lyric from? "I know you've deceived me, now here's a surprise I know that you have 'cause there's magic in my eyes"


Answer: I Can See For Miles

"Bargain". This song was released on the 1971 album "Who's Next". The song is about losing all your material goods for spiritual enlightenment, thus being a "bargain."
4. What album by The Who was released in 1971?

"Who's Next" included songs like "Baba O'Riley", "Won't Get Fooled Again", and "Going Mobile".
5. What word fills in the blank? "He stands like a statue. Becomes part of the machine. Feeling all the bumpers. Always playing clean. He plays by intuition. The digit counters fall. That deaf dumb and blind kid. Sure plays a ____ pinball"

"Pinball Wizard". This song was released on the 1969 album "Tommy", and runs three minutes. This is part of "Tommy", the first "Rock Opera." "Tommy" is about a young man who is deaf, dumb, and blind, but becomes a pinball champion and gains hordes of adoring fans. It was made into a play and continues to run as an off-Broadway production.
6. What word fills in the blank? "Mama's got a _______ ___ she wears on her chest, and when Daddy comes home, he never gets no rest."

"Squeeze Box". This song was released on the 1975 album "The Who By Numbers". "Squeezebox" is a slang term for an accordion, but it is also slang for the vagina. The band just wanted to see if they could get away with singing about the joys of explicit sex.
7. Which song is this from? "I hope I die before I get old"

"My Generation". This is one of the more famous lines from this song. This was released on the 1965 album "My Generation". Townshend wrote this for rebellious British youths known as "Mods." It expressed their feeling that older people just don't get it.
8. What song is the lyric from? "Only love can bring the rain"

This song was released on the 1973 album "Quadrophenia". This is the last track on The Who's rock opera "Quadrophenia". The main character Jimmy suffers from a four-way split personality, with each personality reflecting a member of The Who. This is Pete Townshend's theme. The personality is described as "A beggar, a hypocrite, love reign over me."
9. What word fills in the blank? "They call me the ______ I've been searchin' low and high

"You Better You Bet". This was released on the 1981 album "Face Dances".
Source: Author mex 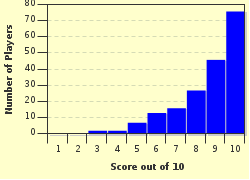 Related Quizzes
1. Essential Who Tough
2. Who's Next Average
3. Come On the Amazing Journey...Part 2 Average
4. The Who Average
5. The Who Lyrics I Average
6. Song by Song: "My Generation" Easier
7. The Who by Numbers Difficult
8. Hope I Die Before I Get Old Average
9. The Jingles from "The Who Sell Out" Tough
10. The Who Lyrics Average
11. A Who Quiz for Who Fans Average
12. Who Lyrics Tough


Other Destinations
Explore Other Quizzes by mex