I give you a couple of lyrics from well know Who songs and you give me the name of the song.

'Baba O'Riley' was recorded in 1971 and was written while Pete Townshend was experimenting with the synthesizer.
2. "When you hear the sound coming, hear the drummer drummin'..."

'I Can't Explain' was recorded in late 1964 and was the first single released under the name 'The Who'.
4. "Nothin' gets in my way, not even locked doors..."

Theme song for The Who's movie 'Tommy' starring lead singer, Roger Daltrey as Tommy. 'Pinball Wizard' was recorded in 1969 and was #4 in the UK charts.
7. "Take me with you, when you leave me..."

John Entwistle, The Who's bassist, wrote this one, instead of the usual Pete Townshend. It was recorded in October 1966.
10. And finally: "We'll be fighting in the streets, with our children at our feet."

'Won't Get Fooled Again' was originally recorded in 1971 and reached #9 in UK charts. The full length version in 8 minutes and 32 seconds long!
Source: Author monkeebeatle 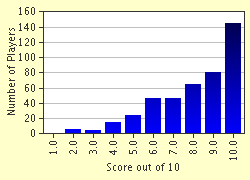 Related Quizzes
1. Lyrics of The Who Easier
2. Song by Song: "My Generation" Easier
3. Albums and Songs of The Who Easier
4. The Who Album Match Easier
5. A Who Quiz for Who Fans Average
6. Who's Greatest Lyrics Average
7. Deaf Dumb and Blind Average
8. The Who "In Other Words" Average
9. The Who Lyrics I Average
10. The Who Sell Out Average
11. Hope I Die Before I Get Old Average
12. Who Are You? Average


Other Destinations
Explore Other Quizzes by monkeebeatle