Do They Have Anything Left? Trivia Quiz

Are all of these guys a little left of center or what? Each of these bands have released an album with the word "left" included in the title. See if you have anything left in the think tank by correctly answering these questions.

Share on Facebook
Share on Twitter
Share by E-Mail
Author
ralzzz
Time
5 mins
Type
Multiple Choice
Quiz #
354,929
Updated
Dec 03 21
# Qns
10
Difficulty
Tough
Avg Score
6 / 10
Plays
175
This quiz has 2 formats: you can play it as a or as shown below.
Scroll down to the bottom for the answer key.

Quiz Answer Key and Fun Facts
1. The album "Holding Onto Strings Better Left to Fray" is the 2011 release by this hard rock band formed in Pretoria, South Africa. Can you name this band?

"Holding Onto Strings Better Left to Fray" debuted at number two on the American Billboard 200 charts. The debut single from the album, "Country Song" was played live for the American television viewers on "Lopez Tonight". The album was produced by Brendan O'Brien who has also produced albums for Pearl Jam, The Black Crowes, Stone Temple Pilots and Red Hot Chili Peppers.

This album featured Troy McLawhorn as lead guitarist but he eventually decided to rejoin his former band, Evanescence.
2. "A Crow Left of the Murder" is the fifth album released by this American nu-metal band. The album was a commercial success with hit singles such as "Megalomaniac" and "Talk Shows on Mute". Can you name the band that released this album?

Incubus is a California spawned nu-metal band which formed in 1991. "A Crow Left of the Murder" is the Brendan O'Brien produced album that was released in 2004. It was the band's fifth release. As can be judged from the album's title, this album is primarily about rebellion and stepping outside of the mainstream, which is exactly what the band did on this release.

The album was a great success as it reached number two on the US Billboard 200 chart.
3. "Sir Lucious Left Foot: The Son of Chico Dusty" is the solo debut album from which rap artist? You may better recognize him as a member of another popular rap duo?

Big Boi, along with Andre 3000, formed the rap duo Outkast. They are widely recognized as being one of the best rap duos ever assembled. The pair met in an Atlanta, Georgia high school where they formed a mutual respect for one another after going head to head in several rap battles.

The album were signed to a major record label right out of high school and the platinum albums started piling up. After releasing several albums together, the pair decided to take a hiatus from the group and release solo albums. "Sir Lucious Left Foot: The Son of Chico Dusty" is the release from Big Boi which featured the hit "Shutterbug".
4. This band's third album "There is Nothing Left to Lose" featured hits such as "Learn to Fly" and "Breakout". Can you name the hard rock group whose front man used to play the drums in a completely different band?

"There is Nothing Left to Lose" is the third album by the Foo Fighters, and the first to feature Taylor Hawkins on the drums. Dave Grohl, Taylor Hawkins and Nate Mendel recorded the album as a trio, but eventually had to add Chris Shiflett on guitar for touring.

This album is seen by many as the first to gel the Foo Fighters into a true band instead of a Dave Grohl solo project. The album received a Grammy award for Best Rock Album in 2000.
5. The Canadian rock band Rush is known for their incredible live performances, many of which have been recorded and released as live albums. "Exit...Stage Left" is one of these. The album was recorded from two live performances in 1981. Which two cities provided the venues for the recording of this album?

Rush is known for their tremendous live shows and they knew they could capitalize on distributing those moments as live concert albums. The band has released several concert albums over the years, and they never disappoint. "A Show of Hands", "All the Worlds a Stage", "Rush in Rio" are all great live Rush albums which should not be missed out on.
6. Collective Soul, the indie-rock band from Atlanta, Georgia released their debut album, titled "Hints Allegations and Things Left Unsaid" in 1993 on a small local record label. After popularity of this single, the band was resigned to a major label and the album was re-released to a national audience in 1994. Which song was the band's first hit that propelled them into the mainstream?

While all of these songs were hit records for Collective Soul, only "Shine" was included on their debut album "Hints Allegations and Things Left Unsaid". The song had that rare ingredient that listeners loved and radio executives could really promote. The song became an instant classic and has been featured on radio stations all over the world.
7. Which Scandinavian death metal band released the album "Left Hand Path" in 1990?

The three wrong answers are not Scandinavian, so that only leaves Entombed to be the correct answer. "Left Hand Path" is a critically acclaimed offering from the death metal band, Entombed. The album marks the high point in the recording career of the band and it continues to be regarded as one of the finest offerings in the genre. Most people are not open to the idea of listening to a death metal record, but this one does have some fine orchestral arrangements, complex passages and some very good dual guitar solos from the bands two guitarists, Uffe Cederlund and Alex Hellid. If you're looking for an introduction into the death metal genre, I can recommend this album as a good place to start.
8. "I Left my Heart in San Francisco" is the award winning album released in 1962 by which crooner?

Tony Bennett picked up two Grammy awards for his title song to the album "I Left my Heart in San Francisco", one for Male Pop Vocal Performance and another for Record of the Year. In addition, the song won another Grammy for the song's arranger, Marty Manning, this one for Best Instrumental Arrangement Accompanying a Vocalist.

The song has remained vital over the years due to it being covered by such a varied group of artists. Tony Bennett and this song became an instant trivia question when he performed the tune on the very first "The Tonight Show with Johnny Carson".
9. The great jazz album "Left of Cool" is from the band Bela Fleck and the Flecktones. This is the band's fifth studio release. Which instrument is Bela Fleck most commonly associated with?

Bela Fleck is the New York jazz banjo player who holds the distinction of being the person nominated in more Grammy award categories than anyone else in the history of the award. His band, the Flecktones, features the brothers Victor and Roy "Future Man" Wooten on bass guitar and synthesized percussion.

The band has also included Jeff Coffin on saxophone and Howard Levy on piano and harmonica.
10. Which bass guitar player of a very successful rock band released the live solo album titles "Left for Live" in 1999?


Answer: John Entwistle of The Who

Many critics have claimed this to be a disappointment and a failure as the songs and the performances did not live up to the potential. The work Entwistle was known for with The Who set the stage for what many thought would be an outstanding solo project, but the results were somewhat lacking.

The albums key moment is a cover of The Who's "The Real Me" which, although not as good as the original, does provide some glimpse into what could have been from this performance.
Source: Author ralzzz

This quiz was reviewed by FunTrivia editor kyleisalive before going online.
Any errors found in FunTrivia content are routinely corrected through our feedback system.
Most Recent Scores
Jan 15 2023 : pollucci19: 10/10
Dec 13 2022 : CardoQ: 10/10 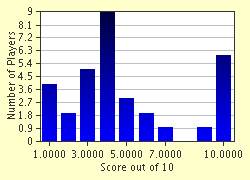