The idea is easy, I give you the rock artist/band name and part of the title of an album, you complete the rest. These albums cover 70s, 80s and 90s.

"Double Fantasy" was the comeback album by John Lennon and Yoko Ono, released in 1980 initially on the newly-formed Geffen Records, and then from 1989 onwards through EMI Records. It was John Lennon's last authorised release, being only three weeks before his murder.
Singles to come from "Double Fantasy" included the following:-
"(Just Like) Starting Over", "Woman", "Walking on Thin Ice" "Watching the Wheels" and "Beautiful Boy (Darling Boy)"
"Double Fantasy" won the Grammy award for "1981 Album of the Year".
In 1989, it was ranked number 29 on Rolling Stone magazine's list of the 100 greatest albums of the 1980s.
2. The first post Bon Scott album for AC/DC was called: "Back in ________"

"Back in Black" released July 1980 had a very different feel to previous albums, predominately due to the death of lead singer Bon Scott in February of 1980.
The band seriously considered disbanding and going their separate ways. Thankfully they didn't and shortly after hired Brian Johnson (formerly of UK Glam Rock band 'Geordie') as the new lead singer and lyricist. Rumour has it Stevie Wright (formerly of The Easybeats), singer of "Evie" was approached, however, was in no fit state to record, let alone tour with the band.
Spawning hit singles such as "Hells Bells", "Shoot to Thrill", "Back in Black", "You Shook Me All Night Long", "Have a Drink on Me","Shake a Leg" and the anthemic "Rock and Roll Ain't Noise Pollution", "Back in Black" released as a tribute to the late Bon Scott, sold 22 million copies in the US (second only to Michael Jackson's "Thriller" album!, 45 million worldwide and number four on the US charts! Their next album, "For Those About to Rock We Salute You", hit number one in the US in 1981.
3. Pink Floyd produced many hit albums over the years, which word correctly fits this title? "Dark Side of the _______"

Recorded at the famous Abbey Road studios, "Dark Side of the Moon" was one of the rare truly collaborative efforts of Pink Floyd, comprising at that time of Roger Waters, David Gilmour, Nick Mason and Richard Wright.
Groundbreaking innovations were trialled, including the use of analog synthesizers, quadraphonic sound, tape looping and multi-tracking.
Alan Parsons (later of 'Alan Parsons Project') was the EMI staff engineer for this album.
Hits included 'Money', 'Dark Side Of The Moon', 'Time', 'Breathe' and 'Great Gig In The Sky'.
4. What was the name of British rock band Led Zeppelin's sixth album? "Physical ________"

Led Zeppelin's sixth album, 'Physical Graffiti' was a double album released in 1975. The album sold eight million copies in the U.S. alone (16 x platinum). Physical Graffiti was the band's first release on their own 'Swan Song' Records label. The two five-story buildings photographed for the album cover are located at 96 and 98 St. Mark's Place in New York City. To enable it to fit, the fourth floor (of five) had to be cropped out. So for the album cover it became a four-story building. Hits from the album include 'Kashmir' (one of my favourites!) used in the movie soundtrack for 'Godzilla', 'Bron-Yr-Aur', 'Trampled Under Foot', 'In My Time Of Dying' and the acoustic track 'Boogie With Stu'.
5. What does American rocker Alice Cooper welcome you to? "Welcome to my _________"

Alice Cooper's first solo album proved to be a massive success. 'Welcome To My Nightmare' released in 1975 reached number five on American Billboard. Hit tracks include 'Only Women Bleed', 'Department of Youth', 'Black Widow' (including an excellent intro from Vincent Price), and 'Welcome To My Nightmare'.
Very heavily involved in the album was Bob Ezrin who also became involved with artists such as KISS, Pink Floyd, Peter Gabriel and Rod Stewart, to name a few.
6. Led by charismatic lead singer Kurt Cobain, Nirvana released a compilation of tracks in 1996. What did they call this album? "From The Muddy Banks of the _______"

Released in October, 1996 'Muddy Banks Of The Wishkah' features live performances recorded from 1989 to 1994.
This album contains smash hits 'Smells Like Teen Spirit', 'Lithium', 'Heart-Shaped Box' and 'Polly' among many other hit grunge songs.
7. Using the very unusual name of Meat Loaf, this American artist released a hugely successful hit album titled? "Bat Out Of ______"

Released in 1977, 'Bat Out Of Hell' recorded at Bearsville Studios, Woodstock, NY, became the third biggest selling album of all time, only eclipsed by Pink Floyd's 'Dark Side Of The Moon', together with AC/DC's 'Back In Black' and Michael Jackson's 'Thriller'.
Smash hits included 'Bat Out Of Hell', 'Paradise By The Dashboard Light', 'You Took the Words Right out of My Mouth (Hot Summer Night)', 'Heaven Can Wait' and 'Two out of Three Ain't Bad'.
Written by Jim Steinman (who along with Marcia McClain provided the voice intro for 'You Took The Words Right Out Of My Mouth'), sung by Meat Loaf, produced by Todd Rundgren, who also featured on guitar, this was to become a break-through album. Surprisingly, initial reaction to the album was slow.
It stayed on the United Kingdom charts for 474 weeks, surpassed only by the 478 weeks of Fleetwood Mac's 'Rumours' album.
8. Another Pink Floyd album, featuring a burning man in a suit on the cover, was titled? "Wish You Were _____"

Pink Floyd's 'Wish You Were Here' was the band's seventh studio album and followed the highly successful 'Dark Side Of The Moon'.
Released in 1975, the album comprised a string of hits including 'Shine On You Crazy Diamond', 'Have A Cigar', 'Welcome To The Machine' and 'Wish You Were Here'.

'Shine On You Crazy Diamond' is a tribute to former band member Syd Barrett, whose drug-induced breakdown had forced him to leave the band several years before. He actually visited Abbey Road studios during recording sessions and the band members initially failed to recognize him!
9. Which of the following bands released an album titled 'Goat's Head Soup'?

Recorded as the follow-up to 'Exile on Main St', The Rolling Stones 'Goats Head Soup' was released in 1973. The best known track to come from this album was 'Angie'. Contrary to popular belief, this song was NOT about David Bowie's first wife Angela. Richards' daughter Dandelion Angela had just been born, and the name was Richards' main contribution to the lyrics.
Most of the album was recorded at Dynamic Sound Studios in Kingston, Jamaica.
Initial reaction to the album was, as usual, mixed, with many expecting a string of hits.
I chose to include this album in the quiz because I like the title!
10. In 1983, Irish rock band U2 released which initially controversial live album? "Under A Blood Red________"

Controversy initially surrounded this album due to the track 'Sunday Bloody Sunday', famously introduced by Bono with the words, "this is not a rebel song".
The album consists of live recordings from three shows on the band's War Tour from Denver, Boston, and St. Goarshausen, Germany.
Source: Author madkeen4 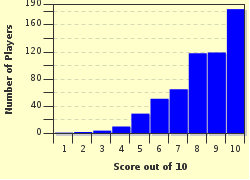 
Other Destinations
Explore Other Quizzes by madkeen4