Why Is That Album in My Collection?! Quiz

No seriously, I have a weird mix... do you know who released these albums? I even have the album with the longest title on record... wanna know what it is?

Share on Facebook
Share on Twitter
Share by E-Mail
Author
PooDog
Time
4 mins
Type
Multiple Choice
Quiz #
118,404
Updated
Dec 03 21
# Qns
15
Difficulty
Average
Avg Score
10 / 15
Plays
3249
This quiz has 2 formats: you can play it as a or as shown below.
Scroll down to the bottom for the answer key.

Quiz Answer Key and Fun Facts
1. Who released the hit album "Waking Up The Neighbours"?

It was the top selling album by a Canadian singer the year it was released.
2. This album called "Post" sneaked into my collection- who is it by?

Released in 1995, it contains the hit "It's Oh So Quiet".
3. "The Writing's on the Wall", with songs featuring Missy Elliot, Timbaland, and Next, was a huge seller for whom?

Released in 1999, it had the massive hits "Bills, Bills, Bills", "Bug A Boo", "Jumpin Jumpin", and "Say My Name" on it.
4. Named after the last track on the album, "Tragic Kingdom" was the album that launched No Doubt into super stardom.

It was the album that contained the hits "Just A Girl", "Spiderwebs", "Don't Speak", and "Sunday Morning".
5. The album "Retrospective" was launched in 1996, years after their initial sucess, and had some of their biggest hits on it. They are...

The album featured 1970's "Make It With You", the group's only number 1 hit, as well as other hit tracks, like "The Guitar Man" and "Baby I'm A Want You".
6. The biggest hit on the album "From The Muddy Banks Of The Wishkah" remains an anthem for teenagers today. This was a live album for whom?

Although they did start out as a live band, Nirvana released this album after many hits, in 1996, two years after the death of lead singer Kurt Cobain.
7. With many of his hit songs on it, "Avalon Sunset" was recorded by whom?

Its my mum's... I swear!
8. This album has the longest name on record, but is most commonly referred to as "When The Pawn...". Who created this bizzare album?

And here is why it holds that record: the full name of this album is "When The Pawn Hits The Conflicts He Thinks Like A King What He Knows Throws The Blows When He Goes To The Fight And He'll Win The Whole Thing 'fore He Enters The Ring There's No Body To Batter When Your Mind Is Your Might So When You Go Solo, You Hold Your Own Hand And Remember That Depth Is The Greatest Of Heights And If You Know Where You Stand, Then You Know Where To Land And If You Fall It Won't Matter 'cuz You'll Know That You're Right". And that my dears, is why it is commonly referred to as "When The Pawn..."
9. "Sweet Kisses" was an album by whom?

This is yet another teen album released during the madness of the Britney, Christina, and Mandy hysteria.
10. The album was "Rumours"; the group was...

This album is famous for, at the time, being the album to stay at number one for the longest time in history.
11. "The ABBA Generation" was a tribute (surprise, surprise) to ABBA by whom?

Although made in 1999, all of the songs were written and recorded years before by ABBA.
12. "Joshua Tree" was a world-wide smash hit for:

It had the hits "Still Haven't Found What I'm Looking For", "With or Without You", and "Where The Streets Have No Name", among others.
13. "Sultans Of Swing" was a huge hit for whom?

Named after the song "Sultans Of Swing", this is still one of the best sellers ever.
14. "Siamese Dream" was an album by whom?

"Siamese Dream" had a very distinctive sound, which disappeared with the release of a later album, "Adore".
15. "...By Request" was a hit album for whom?

A compilation of their biggest hits like "I Love The Way You Love Me", "No Matter What", and "You Needed Me", it also contained remakes of old favourites like "Father and Son", "When The Going Gets Tough", and "Baby Can I Hold You".
Source: Author PooDog 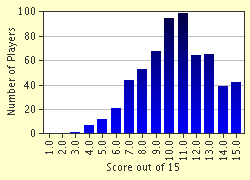 
Other Destinations
Explore Other Quizzes by PooDog