Bob Dylan's songs, especially "Desolation Row," contain several allusions to famous literary works and figures. How much do you know about Dylan's influences?

Share on Facebook
Share on Twitter
Share by E-Mail
Author
skylarb
Time
4 mins
Type
Multiple Choice
Quiz #
110,773
Updated
Dec 03 21
# Qns
10
Difficulty
Average
Avg Score
6 / 10
Plays
2106
Awards
Top 10% Quiz
This quiz has 2 formats: you can play it as a or as shown below.
Scroll down to the bottom for the answer key.

Quiz Answer Key and Fun Facts
1. Two poets are fighting in the captain's tower in "Desolation Row." One is T.S. Eliot. Name the other one. (Last name only)

"And Ezra Pound and T. S. Eliot / Fighting in the captain's tower . . . / Between the windows of the sea / Where lovely mermaids flow." Dylan may also be alluding, in these last two quoted lines, to T.S. Eliot's poem "The Love Song of J. Alfred Prufrock," which contains these verses: "We have lingered in the chambers of the sea,/ By sea-girls wreathed in seaweed, red and brown,/ Till human voices wake us, and we drown."
2. Who is the poet thought by some to be Dylan's namesake?

Bob Dylan's name was originally Robert Zimmerman. Some believe he borrowed his new name from Dylan Thomas, though he has denied it. Dylan Thomas wrote "Do Not Go Gentle Into That Good Night." The other three names given as choices are not the names of real poets, though there is a Matthew Arnold and a William Wordsworth.
3. "A Hard Rain's A Gonna' Fall" is loosely based on what traditional Scottish ballad?

The earliest version of this ballad, which is probably Scottish in origin, was published in the late 1700's. Joan Baez may have introduced Dylan to the ballad, which is about a young man who has been poisoned by his lover's mother. The ballad opens: "'O where ha you been, Lord Randal, my son? / And where ha you been, my handsome young man?' / 'I ha been at the greenwood; mother, mak my bed soon,/
For I'm wearied wi hunting, and fain wad lie down.'"
4. In what song does Dylan quote the 18th Century English poet Alexander Pope? The lyric is: "Fools rush in where angels fear to tread."

Alexander Pope, in his "An Essay on Criticism," wrote: "Nay, fly to Altars; there they'll talk you dead; / For Fools rush in where Angels fear to tread." An allusion to this line is also included in "A Fool Such As I."
5. The poet Robert Browning rhymes the words sandals, candles, handles, and scandals in a single stanza of "Up in a Villa - Down in the City." In what song does Bob Dylan make the same four rhymes?

Compare Dylan's: "Better jump down a manhole, light yourself a candle / Don't wear sandals, and try to force a scandal / Don't want to be a bum, you'd better chew gum / The pump don't work cuz the vandals took the handle" with Browning's "Look, two and two go the priests, then the monks with cowls and sandals / And the penitents dressed in white shirts, a-holding the yellow candles / One, he carries a flag upstraight, and another a cross with handles / And the Duke's guard brings up the rear, for the better prevention of scandals."
6. In what song does Bob Dylan loosely quote the English scholar, writer, and lexicographer Dr. Samuel Johnson? The lyrics are: "They say that patriotism is the last refuge / To which a scoundrel clings."

Boswell, in his "Life of Johnson," attributes to Dr. Samuel Johnson the following quote: "Patriotism is the last refuge of the scoundrel." Dr. Johnson is most famous for his dictionary.
7. In "Desolation Row," Dylan refers to what Shakesperian character(s)?

Shakespeare does not have a character called Cinderella; this character comes from the fairy tale. The song mentions Romeo: "And in comes Romeo, he's moaning / 'You Belong to Me I Believe'" and Ophelia: "Now Ophelia, she's 'neath the window." Romeo comes from William Shakespeare's "Romeo and Juliet," Ophelia from his "Hamlet."
8. What Victor Hugo character does Dylan mention in "Desolation Row?"


Answer: The Hunchback of Notre Dame

None of the other three are characters created by Victor Hugo. Cain, Abel, and the Good Samaritan all come from the Bible. Cinderella is found in fairytales. But Victor Hugo wrote a novel called "The Hunchback of Notre Dame."
9. In "Desolation Row," Einstein is disguised as what legendary figure from English literature?

The lyrics are: "Einstein, disguised as Robin Hood / With his memories in a trunk / Passed this way an hour ago / With his friend, a jealous monk."
10. In the song "You're Gonna Make Me Lonesome When You Go," Dylan says his relationships have been like that of __________. Both were poets.

"Situations have ended sad, / Relationships have all been bad. / Mine have been like Verlaine's and Rimbaud." The two poets had a tumultuous relationship, and Verlaine once shot at Rimbaud, hitting his wrist.
Source: Author skylarb

This quiz was reviewed by FunTrivia editor Bruyere before going online.
Any errors found in FunTrivia content are routinely corrected through our feedback system.
Most Recent Scores
Jan 19 2023 : bmrsnr: 9/10
Dec 09 2022 : Guest 98: 10/10 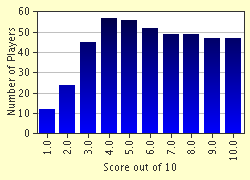