Share on Facebook
Share on Twitter
Share by E-Mail
Author
skylarb
Time
3 mins
Type
Multiple Choice
Quiz #
167,504
Updated
Dec 03 21
# Qns
10
Difficulty
Average
Avg Score
7 / 10
Plays
962
This quiz has 2 formats: you can play it as a or as shown below.
Scroll down to the bottom for the answer key.

30 - 3 = 27. "Dylan's 30th Anniversary Special" was aired on television and recorded on CD. Numerous musicians paid tribute to him during the show, which was dubbed "Bobfest" by Neil Young.
Source: Author skylarb

This quiz was reviewed by FunTrivia editor Bruyere before going online.
Any errors found in FunTrivia content are routinely corrected through our feedback system.
Most Recent Scores
Dec 24 2022 : Guest 189: 1/10
Dec 09 2022 : Guest 98: 9/10 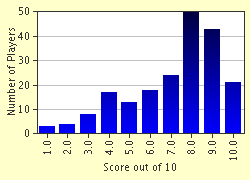