Okay, okay. I have a history of trying to create tough quizzes, with some trick questions thrown in. Not this time! Here's one for the newbies & casual STYX fans! (Read the hints carefully and you can't go wrong!)

Quiz Answer Key and Fun Facts
1. Complete the following lyric: "Domo Arigato...". (Hint: It's also the name of the song!)

From the 1981 "Kilroy Was Here" album. Most hardcore Stygians have mixed emotions about the song (or hate it all together). However, among children of the 80s who have only had casual contact with Styx, this is possibly the most recognizeable Styx song, and one of the best liked.
2. Tommy Shaw once sang about a major problem in his life. It seems he had too much what? (Hint: "Watch" how you answer this one.)


Answer: Time on his hands

Tommy Shaw is probably the second-most recognizeable Stygian of the late-seventies and early-eighties. The song, of course was called "Too Much Time On My Hands".
3. James Young sang the following lyric: "The Queen of the United States, or have you lost your crown?" What song is this from? (Hint: He called this contest the grandest illusion in "America".)

From the 1977 "Grand Illusion" album. "Miss America" is also the only answer which is actually a Styx song.
4. Although different members of Styx sang lead vocals on various songs, Dennis DeYoung is generally considered to be the front-man for Styx during the late 70s and early 80s. (Hint: James Young & Tommy Shaw are not the correct answers)

Dennis was pretty much calling the shots during that time. No Stygian had contractual control of the group, but Dennis usually got his way.
5. In the song "Come Sail Away", what did Dennis DeYoung climb aboard? (Hint: This song made Dennis a big "star". You might say it got his career in "ship" shape.)

"I Thought that they were angels, but to my surprise;
We climbed aboard their starship, we headed for the skies".

Another classic from the "Grand Illusion" album.
6. In the classic Styx ballad "Babe", Dennis DeYoung said his what is leaving? (Hint: He was about to make "tracks")

The song went number one. You can find it on 1979's "Cornerstone" album.
7. STYX refers to the river Styx from Greek mythology. (Hint: It really is as easy as it sounds.)

The band wasn't really into mythology (or devil worship for that matter), but the name had a nice mystical feeling to it and it was the only option no one hated.
8. STYX's eighth album was called "Pieces Of ______" what? (Hint: The correct answer lies within the question)

"Pieces Of Eight" was the 1978 follow-up to "Grand Illusion". It was the group's second consecutive multi-platinum album.
9. It could be said that Tommy Shaw was what type of man? (Hint: Tommy "worked really hard" on this song.)

Another of Tommy's more recognizeable hits.
10. On the "Kilroy" album Dennis DeYoung pleaded, "Don't let it ____" what? (Hint: This question is a sutiable "ending" to this quiz.)

Alas, it has ended. If you didn't do well on this quiz, take the rest. They are harder, but you'll be a full-fledged, hardcore Stygian by the time you are done!
Source: Author Chadler 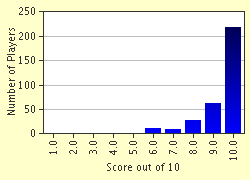 
Other Destinations
Explore Other Quizzes by Chadler