Do you know which word or words are missing from the following quotes said by Elvis? Enjoy, and good luck!

Quiz Answer Key and Fun Facts
1. Complete this well known quote from Elvis Presley: "Man, I was tame compared to what they do now. Are you kidding? I didn't do anything but just _________ ."

From the press conference in New York City 1972, which was prior to Elvis' Madison Square Garden shows.
2. "The image is one thing and the ___________is another, it's very hard to live up to an image." What is the missing word from the above sentence quoted by Elvis?

This was also said at the press conference at Madison Square Garden.
3. "A live concert to me is exciting because of all the _________that is generated in the crowd and on stage. It's my favorite part of the business - live concerts." Which of the following from this sentence was quoted by Elvis?

Also quoted by Elvis in his 1970 acceptance speech for the Ten Outstanding Young Men of the Nation Award.
7. "The first time that I appeared on stage, it scared me ________." Which two words are missing from this quote by Elvis?

You can hear Elvis say this on MGM's 1972 documentary film "Elvis on Tour".
8. "We grew up with it, it more or less puts your _____ at ease. It does mine." What is the missing word from this Elvis quotation?

At the Las Vegas Hilton. The quote can also be heard in MGM's documentary "Elvis on Tour".
After the live shows, Elvis and his band would unwind by singing Gospel songs.
9. "Some people tap their feet, some people snap their fingers, and some people sway back and forth. I just sorta' __________ I guess." What did Elvis say he did?


Answer: do 'em all together

Quoted by Elvis at the press conference previous to his performance in Hawaii. "Elvis Aloha from Hawaii Via Satellite".
Source: Author Julia King 42 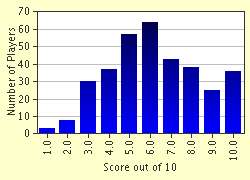 
Other Destinations
Explore Other Quizzes by Julia King 42