Major Tom is for sure one of the most famous astronauts, probably because of his weird launch pad: the mind of the living legend Mr. David Bowie. Major Tom does not only appear in Bowie's songs, he also inspired other artists. A quiz about this spaceman.

Quiz Answer Key and Fun Facts
1. What is the original title of David Bowie's album released in the UK on which Major Tom was first launched? (Read the question carefully before you answer....)

The single name was "Space Oddity", but the album was launched in the UK first as "David Bowie" in 1969. In 1972 the album was reissued under the single title.
2. What was looking different when Major Tom left his capsule and floated in space?

The original lyrics were:

"This is Major Tom to Ground Control
I'm stepping through the door
And I'm floating in a most peculiar way
And the stars look very different today"
3. In which of David Bowie's songs did Major Tom NOT appear?

Def Leppard is the right answer. This British rock band was formed in 1977. They have sold over 65 million albums worldwide and at present they are still touring! The Sex Pistols is also English, but Mötley Crüe and Poison are American bands.
5. Bowie created Major Tom influenced by the movie "2001: A Space Odyssey", produced in 1968. Who was the film director?

"2001: A Space Odyssey" is a science fiction film released in 1968. Kubrick also produced famous movies like "Full Metal Jacket", "The Shining", "A Clockwork Orange" and "Spartacus". In 1999, at the age of 70, he died of a heart attack, shortly after screening the final cut of "Eyes Wide Shut" featuring Tom Cruise and Nicole Kidman.
6. In 1983 the German singer Peter Schilling recorded the song "Major Tom (coming home)" reaching the number one position in the charts of Austria, Canada, Germany and Switzerland. In Bowie's original song Major Tom's last message is: "Tell my wife I love her very much". What is the final message to ground control of Schilling's Major Tom ?


Answer: Give my wife my love

Schilling's hit about Major Tom is from the album "Error in the System", the English counterpart to the German version "Fehler im System". It's the first English album from this German singer, born in Stuttgart in 1956.
7. The single "Space Oddity" obviously was pressed on vinyl. The first release was in the UK on 11 July 1969. What was the name of the B-side?

All of the above tracks are from David Bowie's first album released in 1969 (the album name is the answer to question 1).
8. The British pop group Five Star also refer to Major Tom in their song "Rain or Shine", peaking at number two on the UK chart. "------------ and Major Tom - all the super heroes rolled into one." To which hero do they also refer?

He was born David Robert Jones on 8 January 1947 in Brixton, London.
10. Who was the first human in space (way before Major Tom...) and the first person to orbit the Earth?

On April 12, 1961 Yuri Alekseyevich Gagarin from the former Soviet Union was the first man in outer space aboard the Vostok 3KA-3.
Source: Author Rodge37 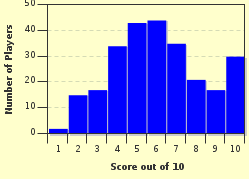 
Other Destinations
Explore Other Quizzes by Rodge37