General questions about Bowie and his music.

Quiz Answer Key and Fun Facts
1. Bowie was not the last name he was born with. Another pop star shared David's original name. What group was THAT pop star in?

Bowie was born David Jones, and didn't want to be confused with Davey Jones of the Monkees. Quite a silly notion in retrospect.
2. Besides guitar and piano, what instrument was Bowie quite proficient at?

He played sax on many of his tunes, but also had more accomplished saxophonists appear as well. David Sanborn jams on YOUNG AMERICANS.
3. Besides "Space Oddity", what Bowie tune mentions Major Tom?

'Ashes to ashes, funk to funky, we know Major Tom's a junkie. Strung out on heaven's high, hitting an all time low.' Robert Fripp from King Crimson has some pretty weird lead guitar on this one.
4. What Bowie tune contains the following line- 'And these children that you spit on as they try to change their worlds, are immune to your consultations, they're quite aware what they're going through.'?

Ch-ch-changes. Look out all you rock and rollers!
5. What soon-to-be-legendary guitar player was a surprise feature on Bowie's hit album, Let's Dance?

Mick was Bowie's regular guitar player, but Vaughan added a great sound for that album!
6. What was the name of the band Bowie formed in the 80's containing two members that were sons of comedian Soupy Sales?

They put out three albums of rock music that had an industrial flavor to them.
7. Which 1984 music video of Bowie's was actually part of a 10-15 minute short film?

The film "Jazzin' for Blue Jean" was about this geeky loser (Bowie) trying to impress some British 'bird' by taking her to see some ultra hip pop artist (also played by Bowie). It was weird to see Bowie play this nerd! 'Ziggy Stardust' was a much longer concert film that came out in the 70s.
8. Which Bowie tune contains the lyric, 'He took it all too far, but boy could he play guitar.'?

Sang this once at karaoke. The lyrics are very odd when you see them!
9. What was the name of both a tune by Bowie and a science fiction novel by George Orwell?

'Beware the savage roar, of 1984!' Cool tune.
10. What Bowie tune is also the name of a movie starring Jeff Bridges and Karen Allen?

Bridges played an alien who duplicated the form of a dead human. Co-Karen Allen also played Boone's girlfriend in 'Animal House'. 'There's a Starman, waiting in the sky, he'd like to come and meet us but he thinks he's blow our minds.'
11. The line, 'Wham bam thank you maam,' is contained in which Bowie tune?

It's yelled out between choruses near the end.
12. Which Bowie tune was covered by The Wallflowers, whose version got some decent airplay in the late 90's?

'We could be heroes, just for one day.' Great tune. Good cover by Jakob Dylan and the guys.
13. Which Bowie tune contains the line, 'Hot tramp, I love you so.'?


Answer: He loves her very much.

'And I think my spaceship knows which way to go. Tell my wife I love her very much, she knows.' I remember listening to this tune in my early teens and thinking what an odd sounding song it was!
15. Which tune begins with a crowd roaring and Bowie speaking, 'This aint rock and roll, this is genocide!'?

'Get out of the doorway baby, you'll catch your death in the fog. Young girls, they call him the diamond dog.'
Source: Author SaxMan4 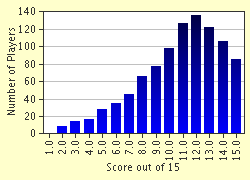 
Other Destinations
Explore Other Quizzes by SaxMan4