This Is a Tribute to David Bowie Quiz

A tribute to David Bowie, his songs and persona.

David Bowie released "Space Oddity" in 1969, his first release that gained entry as a top five hit in the UK singles chart. The song relates to a fictional astronaut, Major Tom; it was released shortly before the Apollo moon landing.
2. What was David Bowie's successful chart hit as his alter ego Ziggy Stardust?

"Young Americans" album was released in 1975 and gained success with the song "Fame". The song was a collaboration between Bowie, John Lennon and Carlos Alomar, recorded in New York.
4. In the late 1970s David Bowie collaborated on three successful albums with Brian Eno. What were they known as?

In 1977 David Bowie and Brian Eno collaborated on an electronic influenced album "Low", followed by two others, "Heroes" and "Lodger". Brian Eno had his own success with the album "Another Green World".
5. In 1980 David Bowie released the album "Scary Monsters (And Super Creeps)". What was the major hit from it?

"Let's Dance" was the title track of the album and it became an international hit for Bowie.
7. Although this quiz is a tribute to David Bowie, Bowie himself released an album of tributes to other artists. What album is this?

The "Pin Ups" album was the seventh for David Bowie with a cover featuring Twiggy and himself. The album was released in 1973 with cover songs of a range of other artists that Bowie wanted to acknowledge.
8. One of David Bowie's most popular song was "The Jean Genie". What album is it on?

"Aladdin Sane" was a studio produced album released in 1973 that received a mixture of critical appraisals both in the UK and the USA. There were two singles released off the album "The Jean Genie" and "Drive-In Saturday". "The Jean Genie" was always performed by Bowie in his live shows.
9. In 1995 David Bowie collaborated again with Brian Eno and produced what album?

Interestingly the album cover was a combination of five portraits by David Bowie of himself. The hook up with Brian Eno was as a direct result of a mixture of music by Eno and Bowie played at Bowie's wedding.
10. What was David Bowie's last album released days before his passing?

"Blackstar" was David Bowie's 25th album and his last released two days prior to his passing on 10 January 2016.
Source: Author ClaudiaCat 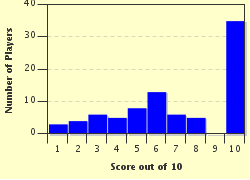 Related Quizzes
This quiz is part of series Quiz Commission 40:

This is a test quiz list, populated with quizzes from the Author's Lounge "Commission 40".