Here is some info about Iron Maiden that you might not know.

Share on Facebook
Share on Twitter
Share by E-Mail
Author
mex
Time
4 mins
Type
Multiple Choice
Quiz #
283,099
Updated
Dec 03 21
# Qns
10
Difficulty
Average
Avg Score
6 / 10
Plays
390
This quiz has 2 formats: you can play it as a or as shown below.
Scroll down to the bottom for the answer key.

Quiz Answer Key and Fun Facts
1. What song is this lyric from: "Sliding we go, only fear on our side To the edge of the wire, and we rush with the tide Oh the water is red, with the blood of the dead But I'm still alive, pray to God I survive"?

The song is about the terrifying experience being a soldier during Operation Overlord on D-Day of the 1944 World War II Battle of Normandy. This song was written by Adrian Smith, Steve Harris, and Bruce Dickinson. It was released on 2006's "A Matter of Life and Death".
2. Which of these songs does guitarist Dave Murray NOT have a credit for?

"Blood Brothers" was written by Steve Harris and was released on the "Brave New World" album in 2000.
3. Which of these songs gave Bruce Dickinson his first songwriting credit since joining Iron Maiden?

"Revelations" was written by Bruce Dickinson alone. It was released on the "Piece of Mind" album in 1983. Dickinson helped write some of the songs on 1982's "The Number of the Beast", but due to his contract with his previous band Samson, he couldn't be credited.
4. What song is the lyric from: "Let me tell you a story to chill the bones About a thing that I saw One night wandering in the Everglades I'd one drink but no more"?

"Dance of Death" was written by Janick Gers and Steve Harris and was released on the "Dance of Death" album in 2003.
5. Where was the "Death on the Road" live album recorded?

"The Prisoner" was named after a television show of the same name. The voice at the beginning of the song is actor Patrick McGoohan.
8. Prior to Iron Maiden, Nicko was in a band called Trust.

Iron Maiden and Trust toured together.
9. Which song has these lyrics: "Infinite Dreams, I can't deny them Infinity is hard to comprehend I couldn't hear those screams Even in my wildest dreams"?

"Infinite Dreams" was written by Steve Harris and was released on 1988's "Seventh Son of a Seventh Son".
10. What song is the lyric from: "Now that I know that the right time has come My prediction will surely be true The impending disaster it looms And the whole of the village is doomed Why won't you listen to me Is it so hard to understand That I am the real seventh son Your life or death on me depends"?

"The Prophecy" was written by Dave Murray and Steve Harris and was released on 1988's "Seventh Son of a Seventh Son".
Source: Author mex

This quiz was reviewed by FunTrivia editor ralzzz before going online.
Any errors found in FunTrivia content are routinely corrected through our feedback system.
Most Recent Scores
Jan 03 2023 : i_rdrz: 9/10
Dec 23 2022 : Guest 98: 10/10 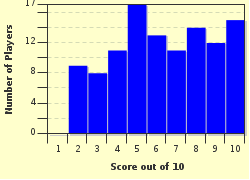 
Other Destinations
Explore Other Quizzes by mex