Test yourself! Take this No Prayer for the Dying Quiz | Music

This is a quiz about the eighth album by the group Iron Maiden.

Quiz Answer Key and Fun Facts
1. Adrian Smith, who did not agree with the direction the band was taking, left the band just before the album went into production and was replaced by whom?


Answer: Bring Your Daughter...to the Slaughter

The song made it to number one despite a ban by the BBC. The song went straight to number one in January 1991. "Hooks in You" is one of the tracks on the album and both "Smoke on the Water" and "Highway Star" are by Deep Purple.
3. Which fighter plane is mentioned in the song "Tailgunner"?

According to the lyrics "Nail that Fokker kill that son". This part of the song is about the bombing of Dresden during World War II. Spitfire is a British fighter plane used in the same war. Airbus A320 and Concord are/were commercial aircraft.
4. Who was the producer of seven out of the the first eight albums by Iron Maiden?


Answer: No Prayer on the Road

"No Prayer on the Road" was the support tour of the album that featured Janick Gers for the very first time. The tour started at Milton Keynes, England in September 1990 and took in England, Scotland, Wales and Northern Ireland before going into continental Europe, North America and Asia.
6. The album cover depicts Eddie bursting from the grave. When the album was re-released in 1998 the new album cover had something on it that the original did not have. What was it?


Answer: Inscription on the plaque of the tomb

The inscription reads "After the Daylight, The Night of Pain, That is not Dead, Which Can Rise Again". On the original Eddie was seen grabbing a grave digger by the neck. The grave digger was removed from the re-release.
7. The song "Bring Your Daughter...to the Slaughter" was recorded and released by Bruce Dickinson for the sound track of which film?


Answer: A Nightmare on Elm Street 5: The Dream Child

Apart from Bruce Dickinson the sound track of "A Nightmare on Elm Street 5: The Dream Child" featured another nine artists, including Romeo's Daughter, W.A.S.P, Mammoth and Samantha Fox. Steve Harris liked the song very much so Iron Maiden recorded it.
8. "No Prayer for the Dying" was recorded in a barn in Essex belonging to which member of Iron Maiden?

The album was recorded on Steve Harris's property using the Rolling Stones Mobile Studio. Bruce was living in Chiswick, West London, Eddie is the mascot of the band and Adrian Smith had left the group before the album was recorded.
9. The album contains ten tracks. Which of the following tracks does not appear on the album?

"Holy Smoke" was Iron Maiden's 21st single release in the UK and made it to number three in the charts. The song is about the many scandals of the television Evangelists, but it is not against Christian religion.
Source: Author gme24

This quiz was reviewed by FunTrivia editor agony before going online.
Any errors found in FunTrivia content are routinely corrected through our feedback system.
Most Recent Scores
Jan 04 2023 : i_rdrz: 9/10
Dec 23 2022 : Guest 98: 10/10 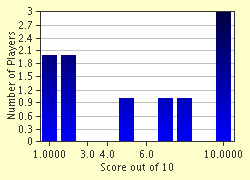