Iron Maiden - Before and After Quiz

The boys in the band weren't always in Iron Maiden. See if you can guess these bands by their original line-ups.

Jannick Gers played briefly with Ian Gillan, June 1981 to November 1982, putting out only one album under this name.
5. Dee Snider, Bernie Torme, Marc Russel and Clive Burr were members in this short lived band; who were they?

Clive Burr played with Dee Snider in this band, they had one album in the late '80s. The album went by the name "Bloodied, But Unbowed".
6. Can you guess the band that included Nicko McBrain, Peter "Mars" Cowling, Tony Carey, Bert Hermiston, Susie Mckinley?

Nicko McBrain didn't do much before Iron Maiden, but he did play on a few albums in the late '70s for Pat Travers before he was replaced with Tommy Aldridge.
7. Rob Naylor, Jeff Singer, Steve Wray and John Slater are all members of this post Iron Maiden band. Who are they?

Blaze Bayley, with Iron Maiden from '94 to '99, never impressed me, but he was part of the band. Note: the other three choices were names of his band's albums!
8. Chris Aylmer, Thunderstick and Bruce Bruce were known as what band in the early 1980's?

One of Bruce Dickinsons' early bands, as we all know. He recorded two studio albums with the band. Interestingly, he appeared on the cover for the album "Survivors" but was not on the album at all. The original singer was fired after the album was done and Bruce was hired for the supporting tour.
9. Dennis Wilcock, Mick Clee, Tony Clee, Doug Sampson and Steve Harris made up this "happy" band. Who were they?

Dennis Stratton left the band after the first two albums just like Paul Di'anno. He reunited with Clive Burr during his tenure with this band.
Source: Author twigs70 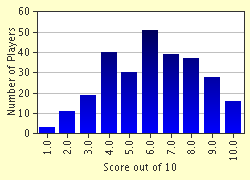 
Other Destinations
Explore Other Quizzes by twigs70