A quiz on song lyrics from the great heavy metal band Iron Maiden. Just name the song. Shouldn't be hard for Maiden fans.

Quiz Answer Key and Fun Facts
1. "Walking through the city, looking oh so pretty I've just got to find my way"

Off of the "Iron Maiden" album. About a guy who follows women around and flashes.
2. "Through earthquakes and starvation The warlord will arise Terror, death, destruction Pour from the Eastern sands"


Answer: "Die with Your Boots On"

From the "Piece of Mind" album. Perhaps some sort of prophecy.
3. "I'm running I'm hiding in my dreams you're always there"


Answer: "Phantom of the Opera"

From the "Iron Maiden" album. A good song based on the musical story.
4. "Don't you dare to save your son Kill him now and save the young ones Be the mother of a birth strangled babe Be the devil's own, Lucifer's my name"

From "Seventh Son of a Seventh Son." There's a lot of reference to folklore and mythology in this song.
5. "As the reasons for the carnage cut their meat and lick the gravy, We oil the jaws of the war machine and feed it with our babies."


Answer: Stranger in a Strange Land

From the "Somewhere in Time" album. I hope you didn't think it was "Brave New World", which goes "A brave new world, in a brave new world."
7. "Could it be it's the end of our world? All the things that we cherish and love Nothing left but ot face this all on my own 'Cause I am the chosen one"

From "Brave New World." About someone with a quest.
8. "Covered in sinners and dripping with guilt Making you money from slime and from filth Parading your bellies in ivory towers Investing our lives in your schemes and your powers"


Answer: "Be Quick or Be Dead"

Off of "Fear of the Dark." Interesting lyrics.
9. "You're running away don't you know what you're doing Can't you see it'll lead you to ruin?"

From the "Number of the Beast" album. Continuation of the song "Charlotte the Harlot."
10. "Mystery madman a victim of cruel charade Some innocent pawn in an end game one more stalemate"


Answer: "Only the Good Die Young"

Off of "Seventh Son of a Seventh Son." Sort of a companion piece to "The Evil That Men Do."
11. "Adrift on the ocean Afloat in a daydream Or lost in a maze Or blind in the haze"


Answer: "The Angel and the Gambler"

Off of "Virtual XI." Sorry, but I kinda hate this song. Very long and repetitive.
12. "There's a conflict in every human heart And the temptation is to take it all too far"


Answer: "The Edge of Darkness"

From the "X-Factor" album. Based on the movie "Apocalypse Now", which was, in turn, based on Joseph Conrad's book "Heart of Darkness". Iron Maiden would've called the song "Heart of Darkness", but Conrad's estate would not let them.
13. "Lost a hell that I revisit Lost another time and place Lost a parallel existence Lost a nightmare I retrace"

From the "Brave New World" album. Weird song.
14. "Shell of a man God preserved - a thousand ages But open the gates of my hell - I will strike from the grave."

From "Somewhere in Time." About someone with a near death experience.
16. "An easy way for the blind to go, A clever path for the fools who know the secret of the hanged man - the smile on his lips."

From the "Piece of Mind" album. "Powerslave" is supposed to be the continuation of this song.
17. "Well I'm moving through the shadows at night Away from the staring eyes Any day they'll be looking for me 'Cause I know I show the signs"


Answer: "Murders in the Rue Morgue"

From "Killers." Based on the Edgar Allan Poe story.
18. "I'm in a cold cold sweat I taste the smell of death I know the moment's getting closer"

From "No Prayer for the Dying." One of the songs that makes this album worth listening to.
19. "When you know that your time is close at hand Maybe then you'll begin to understand Life down there is just a strange illusion."


Answer: "Hallowed Be Thy Name"

From the "Number of the Beast." If you didn't know this one, you really can't call yourself an Iron Maiden fan.
20. "Give me the strength to hold my head up and spit back in their face"


Answer: "Can I Play With Madness"

From "Seventh Son of a Seventh Son". First single from that album.
21. "When you can't find the words to say, It's hard to make it through another day, And it makes me wanna cry, And throw my hands up to the sky."

From "Somewhere in Time." Bruce Dickinson wanted to make an acoustic album, while Adrian Smith wanted to make one with catchier songs, such as "Wasted Years." Steve Harris turned both ideas down.
22. "Lights out, we live in a world of darkness No doubt, everything's up for sale We sleep, all of the world is burning We pray to God for a better deal"


Answer: "Judas Be My Guide"

From "Fear of the Dark." I think this song is about the hypocrisy of life.
23. "Now it burns his hand he's turning to laugh Smiles as the flame sears his flesh Melting his face screaming in pain Peeling the skin from his eyes"


Answer: "Children of the Damned"

From the "Number of the Beast." Oddly, the line "Peeling the skin from his eyes" is not in the CD booklet.
24. "Nothing you can contemplate will ever be the same Every second is a new spark, sets the universe aflame"

From the "Brave New World" album. First single off of that album.
25. "Can I tempt you, come with me, Be Devil may care, fulfill your dream, If I said I'd take you there, Would you go, would you be scared?"

Off the "Somewhere in Time" album.

And that's the end. Thanks for playing.
Source: Author IronMaiden980 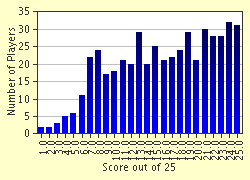 
Other Destinations
Explore Other Quizzes by IronMaiden980