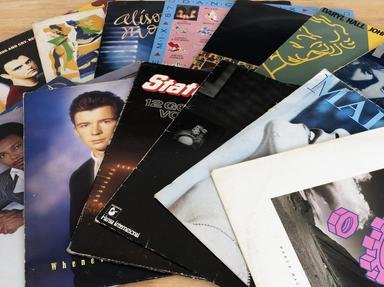 Ahh, 1985 - the year I celebrated my 18th birthday. But what was I listening to in the year that Live Aid took place? All correct answers were British chart entries during 1985.

Quiz Answer Key and Fun Facts
1. Duran Duran had a hit in 1985 with the theme from a James Bond film. What was it?


Answer: View to a Kill

The song "View to a Kill" by Duran Duran was released on 18 May 1985 and spent 16 weeks on the UK singles chart. It peaked at number two in the UK but reached number one in the USA. The film "View to a Kill" (1985) was the seventh of the franchise to feature Roger Moore in the title role and was also the last time Moore played Bond.

The theme to "The Living Daylights" (1987) was recorded by Aha, "Nobody Does It Better", the theme from "The Spy Who Loved Me" (1977) by Carly Simon and "For Your Eyes Only" (1981) by Sheena Easton.
2. What was the name of the soul band from California who's best known UK hit was "Free Yourself"?

"Free Yourself" by The Untouchables was released in the UK in April 1985. The song spent 11 weeks on the UK singles chart and reached number 26.
3. Who had a hit in the spring of 1985 with "Feel So Real"?

"Feel so Real" by Steve Arrington was released in April 1985 and spent 10 weeks on the UK singles chart, peaking at number five.
4. Who were singing about their "Obsession" in 1985?

"Obsession" was Animotion's only UK hit. Released in May 1985, "Obsession" spent 12 weeks on the UK singles chart and reached number five.
5. Which 1985 hit does the following lyric come from? "Do you remember chalk hearts melting on a playground wall? Do you remember dawn escaped from moon washed college halls?"

"If You Love Somebody (Set Them Free)" was released in June 1985. This song was Sting's first solo release after parting company with The Police and it spent seven weeks on the UK singles chart, peaking at number 26.
8. Which chart topper from 1985 contains this lyric? "I must be hallucinating Watching angels celebrating. Could this be reactivating All my senses dislocating? This must be a strange deception By celestial intervention. Leavin' me the recollection Of your heavenly connection."


Answer: "There Must Be An Angel (Playing With My Heart)" by Eurythmics

From the album "Be Yourself Tonight", "There Must Be An Angel (Playing With My Heart)" by Eurythmics spent one week at number one in July 1985 during its 13 weeks on the UK singles chart. This song features a harmonica solo by Stevie Wonder.
9. Who had a top 30 hit with "Grimly Fiendish" in 1985?

Released on 30 March 1985, "Grimly Fiendish" by The Damned spent seven weeks on the UK singles chart and reached number 21. The Damned are an English punk/goth rock band who formed in London in the mid 1970s and continue to tour 30 years later.
10. Who were "Walking on Sunshine" on the spring of 1985?


Answer: Katrina and The Waves

Released on 4 May 1985, "Walking on Sunshine" by Katrina and The Waves spent 12 weeks on the UK singles chart, peaking at number eight. The single was rather optimistically re-released on a different record label the following year, but the re-release only made it to number 53.
11. Which top twenty hit of 1985 opens with the following lyrics? "Where have all the good men gone And where are all the gods? Where's the street-wise Hercules To fight the rising odds? Isn't there a white knight upon a fiery steed? Late at night I toss and turn and dream of what I need"


Answer: "Holding Out for a Hero" by Bonnie Tyler

Released at the end of August 1985, "Holding Out for a Hero" by Bonnie Tyler spent 13 weeks on the UK singles chart and reached number two. This song has featured on a number of film soundtracks.
12. Who had a hit in 1985 with the song "Take on Me"?

Norway's biggest selling act, a-ha released "Take on Me" on 28 September 1985. It spent 19 weeks on the UK singles chart, peaking at number two. The single topped the charts in the USA, but it was the follow-up, "The Sun Always Shines on TV" that topped the UK charts.
13. Who released "Love Like Blood" in February 1985?

Released in February 1985, "Love Like Blood" spent nine weeks on the UK singles chart and reached number 16. Killing Joke formed in London at the tail end of the British punk era and "Love Like Blood" was the only one of their singles to reach as high as the top 20.
14. Which top twenty hit of 1985 contains the following lyric? "You don't need money, don't take fame Don't need no credit card to ride this train Its strong and its sudden and its cruel sometimes But it might just save your life That's the..."


Answer: "Power of Love" by Huey Lewis and The News

Released in early May 1985, "19" by Paul Hardcastle spent 16 weeks on the UK singles charts, five of which were spent at number one. The song was about the Vietnam War.


All information about chart placing used in this quiz comes from the 19th edition of 'The Guinness Book of British Hit Singles and Albums". Thanks for playing.
Source: Author lizzbett 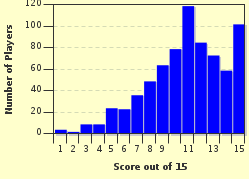 
Other Destinations
Explore Other Quizzes by lizzbett