Here is a quiz involving the highly anticipated third album by the band My Chemical Romance. Enjoy.

Quiz Answer Key and Fun Facts
1. What song is this lyric from? "So raise your glass high, for tomorrow we die, and return from the ashes you call"

The song "Mama" had guest vocals from "Cabaret" singer Liza Minnelli (as Mother War). Also the song had guest vocals from Gerard and Mikey Way's mother Donna Lee Way, and Frank Iero's mother Linda Iero.
2. What song is this lyric from? "I spent my high school career, spit on and shoved to agree, so I can watch all my heroes, sell a car on TV"

"Disenchanted" was first played during My Chemical Romance's first headlining tour with Alkaline Trio and Reggie and the Full Effect.
The song back then was called "Shut up and Play".
3. Finish this lyric: "So sick and tired of all needless beating_____"


Answer: but baby when they knock you....

This lyric is from the Song "I Don't Love You". If you listen carefully you can hear this song being played in MCR's DVD "Life on the Murder Scene".
4. The lyric "I'm just a ghost, So I can't hurt you anymore", is from the song "This is How I Disappear".

"This is How I Disappear" was the only song besides the hidden track that wasn't discussed on the "Welcome to the Black Parade- EP" for iTunes.
5. Finish this lyric: "Because one day, I'll leave you, A phantom, to lead you in the summer,____


Answer: To join the Black Parade

"Welcome to the Black Parade" is the first single from My Chemical Romance's album "The Black Parade". For the main character of the album the Patient, death comes for him in the form of a Black Parade. This is because his strongest memory is his father taking him to a parade when he was younger.
6. Fill in the blanks: "____ loves the beat and the lust it commands, Drop the dagger and lather the blood on your hands, _____"

The song "The Sharpest Lives" tells a story about substance abuse, a topic that lead singer Gerard Way knows a great deal about. Gerard had been sober for over two years, at the release of this album! YAY GERARD!
7. The whispers at the beginning of the song "Sleep" are Ray Toro (guitar).

At the beginning of "Sleep" it is Gerard Way (lead singer) describing the nightmares that he had during the nights they spent in the Paramour (a haunted recording studio).
8. Fill in the blanks: "Because they sleep with a ____, and keep an eye on you, ___."

This lyric is from "Teenagers", a song Gerard wrote after he became paranoid that he was getting old and couldn't relate to teenagers anymore. The song basically talks about how teens are over medicated and try to solve all their problems in a violent way.
9. What song is this lyric from? "I'm the kind of human wreckage that you love".

"Blood" is a hidden track on "The Black Parade". Surprisingly, the song is pretty funny, and shows that My Chemical Romance haven't lost their sense of humor. It also is the shortest song on the album.
10. Fill in the blank from this song: "Baby I'm just ____ from the chemo".

The song "Cancer" is very personal, and a difficult song to hear, let alone sing. The song is mainly just Gerard (lead singer) and Rob Cavallo (producer) on piano. Cancer affects one in three people, this song is one of the favorites of mostly all the band members.
Source: Author sunshine10001 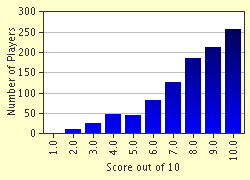 
Other Destinations
Explore Other Quizzes by sunshine10001