Are You a Killjoy? Trivia Quiz

How well do you now the band My Chemical Romance? Can you identify their songs, and lyrics? Are you a true Killjoy?

Quiz Answer Key and Fun Facts
1. What song are these three lines from? "And after all this time that you still owe You're still the good-for-nothing I don't know So take your gloves and get out"


Answer: I Don't Love You

Gerard Way was quoted, after he dyed his hair red, saying he didn't want to be part of "the thirty-something rock culture". He has also been known to dye it white and black.
2. What comes next? "I see you lying next to me, with words I thought I'd never speak.."

Frank has his own clothing line, record label, and publishing company called Skeleton Crew.
3. These lyrics are from which song? "I miss you, I miss you so far And the collision of your kiss that made it so hard"


Answer: the saviour of the broken

The band broke up in early 2013. A short goodbye was posted on their website.
6. "I spent my high school career Spit on and shoved to agree." What song does this come from?

Mikey Way originally auditioned for Frank Iero's band Pencey Prep. He was denied.
7. "I Don't Love You" is on which album?

Ray, Gerard, and Mikey all attended the same high school. Additionally: Toro is not Ray's real last name. It is his middle name. His full name is Raymond Toro Ortiz.
8. "I never said I'd lie and wait forever If I died, we'd be together" is the opening for which song?


Answer: The Ghost Of You

Ray keeps weights in the back of the tour bus, and runs every day. Also: his trademark is his Afro, and he doesn't mind people touching it, just so long as they don't pull on it.
9. "When we were young we used to say That you only hear the music when your heart begins to break." What comes next?


Answer: Now we are the kids from yesterday

Mikey loves sushi, and claims that he could eat his body weight in it. He used to be nearsighted, but got Lasik eye surgery in 2006.
10. "Forget about the dirty looks The photographs your boyfriend took" What comes next?


Answer: You said you read me like a book

The front of the album "Three Cheers For Sweet Revenge" was designed by Gerard.
Source: Author sparksohma 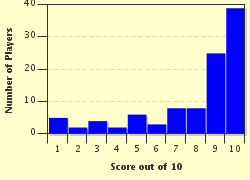 
Other Destinations
Explore Other Quizzes by sparksohma