My Chemical Romance...what I know about this great band in a quiz.

Quiz Answer Key and Fun Facts
1. True or false? In the song "Cemetery Drive", the title is used in the song.

Although 'cemetery' is obviously mentioned, the full title is not used in the same line at any one time.
2. Which one of the band members was hired after another was kicked out?

Matt Pelisser was the original drummer (and founder with lead singer Gerard Way) of MCR, but was replaced by former sound manager for The Used, Bob Bryar, after a personality clash with lead guitarist Ray Toro.
3. Which member of the band designed the cover for their second album, "Three Cheers For Sweet Revenge"?

Gerard Way is actually working on a comic book, and has loved them since childhood.
4. What was the name of their first album?


Answer: I Brought You My Bullets, You Brought Me Your Love

Each of MCR's albums have a story behind them. The first is two lovers being chased by vampires, the second is a sequel of sorts to the first.
6. What is the relation of Gerard Way to Mikey Way?

Mikey Way has undergone refractive surgery, which reshapes the cornea and reduces the reliance on glasses or contact lenses.
7. Complete the lyrics... "Long ago, just like the hearse you'd die to get in again..."


Answer: We are so far from you

This line is from the song "Helena", which is dedicated to the passing of Gerard and Mikey Way's grandmother, Elena.
8. What songs are these lyrics from? "As snow falls, on desert skies until the end of everything."

This was the last song of their first album.
9. Where did MCR get the idea for the name of their band?

All of the members of My Chemical Romance are from New Jersey, except for Bob Bryar who is from Chicago.
Source: Author chocobo_gerbil 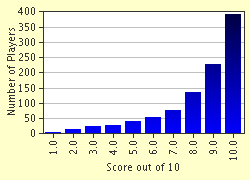 
Other Destinations
Explore Other Quizzes by chocobo_gerbil