This is a quiz on the songs that are at the end of a few Relient K's albums (bonus tracks). And there are a few questions on "The Pirates Who Don't Do Anything" as well.

Quiz Answer Key and Fun Facts
1. What is the last word in the bonus track entitled "Silly Shoes"?

"Silly Shoes" comes at the end of "Jefferson Aero Plane," on the album entitled "Two Lefts Don't Make a Right...But Three Do."
2. Which of these is NOT a city mentioned in "The Pirates Who Don't Do Anything"?

This line is said, and then it goes into the verse which says, "If apples are green and carrots are orange..."
4. The other bonus track is called "Skittles and Combos." What is the name of the CD that this is found on?


Answer: The Anatomy of the Tongue in Cheek

"Skittles and Combos" is a song on "The Anatomy of the Tongue in Cheek." "Silly Shoes" is a song on "Two Lefts Don't Make a Right...But Three Do."
5. What will the "Pirates Who Don't Do Anything" say to you if you ask them to do something?

"We don't know, what he did,
but we're down with Captain Kidd,
We don't wake up late for lunch,
But we all eat Captain Crunch,
We don't smoke,
We don't chew,
We watch Captain Kangaroo!"
7. What does Relient K tell people to bring to their next show?

"So this is how the story goes
Want everybody to know
Love skittles and combos
So bring some to our next show."
8. In "Silly Shoes," what kind of food is mispronounced?

"Deny us combos
Refuse us skittles
I admit those words hurt a little
But we know it'll be ok
If you just send some our way."
10. In "The Pirates Who Don't Do Anything," what is he "not too good at"? 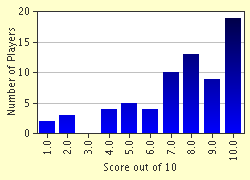 
Other Destinations
Explore Other Quizzes by moog36