The Life and Works of David Bowie Quiz

General questions about the life and works of David Bowie.

Quiz Answer Key and Fun Facts
1. What was the name of the first band David Bowie formed in 1962?

The Konrads first came into existence when they made an appearance with Jess Conrad. The band consisted of five members: David Jones (later to be known as David Bowie) played the tenor saxophone; Neville Wills played the guitar, as did Alan Dodds; Dave Crook played the drums; and George Underwood was the vocalist.
2. What was David Bowie's birth-name?

To avoid being confused with Davy Jones from The Monkees, in 1966 David Robert Jones changed his name to David Bowie. The surname Bowie was taken from the Alamo hero Jim Bowie, and from his Bowie knife.
3. David Bowie's first song to capture the attention of the public in 1969 was called what?

'Space Oddity' was David Bowie's first song to go into the top ten in the UK Singles Chart. This song focuses on a fictional astronaut named Major Tom. The BBC used 'Space Oddity' when it was reporting the landing on the moon.
4. In the BBC's 2002 poll of the '100 Greatest Britons', what position did David Bowie hold?

The '100 Greatest Britons' was first broadcast in 2002. The votes were cast by members of the general British public. Although the title was '100 Greatest Britons', people from other nations were also listed, including Irishmen Bono and Bob Geldof. Other celebrities to make an appearance included David Beckham and Johnny Rotten.
5. Which song was performed by both David Bowie and Queen?

After becoming a solo performer, this was David Bowie's first musical collaboration. David Bowie worked with many artists, including Iggy Pop and Mick Jagger. 'Under Pressure', released in 1982, was the song which was performed by both Queen and David Bowie.
6. Name the David Bowie song that includes the lyrics: 'Fear my blood enraged, it's just the fear of losing you'.

'Cat People' was released in 1982. This song had slight Goth rock influences. This music style kept it in line for the film it was recorded for, 'Cat People' by Giorgio Moroder. It was also used in Quentin Tarantino's 2009 film, 'Inglorious Bastards'.
7. Along with his singing career, David Bowie has also tried his hand in acting. In which film did he have his first major role?


Answer: The Man Who Fell to Earth

David Bowie was an extra in many films. 'The Man Who Fell to Earth', however, was the first film he starred in with a major role. The movie was released in 1976 and it was of the science fiction genre. It is considered a 'cult' film, and is often credited for its beautiful imagery.
8. Where did Bowie move to in 1976, in an attempt to boost his declining career?

During Bowie's time spent in Berlin, he worked with Iggy Pop. He also released three albums in that time called 'Low', 'Heroes' and 'Lodger', and they are collectively known as the 'Berlin Trilogy'. Producer Brian Eno was involved in producing these three albums.
9. What was Bowie's first US Billboard number one hit?

David Bowie's first number one in the US came with 'Fame' in 1975 (Billboard Hot 100). 'Fame' was included in Bowie's album 'Young Americans'. It was co-written by Carlos Alomar and John Lennon, although John Lennon's part in writing the song was very small.
10. In which weekly music newspaper in 1972 did Bowie state that he was bisexual?

After announcing that he was bisexual, in a later interview with music magazine 'The Rolling Stone', he claimed that the statement was 'the biggest mistake I ever made'. The 'Melody Maker' article came out in January 1972. The 'Rolling Stone' article appeared in 1983.
Source: Author PulpFairy 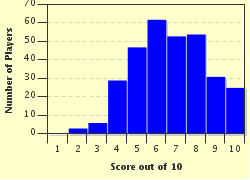 
Other Destinations
Explore Other Quizzes by PulpFairy