As the title suggests, a quiz filled with a selection of David Bowie questions.

Quiz Answer Key and Fun Facts
1. Which of these acts has David Bowie not produced?

David Bowie produced Mott the Hoople's album "All The Young Dudes" in 1972. He produced Lou reed's album "Transformer" in 1972. he has produced Iggy Pop three times: "The Idiot" in 1977, "Lust For Life" in 1977 and "Blah Blah Blah" in 1986. Although David Bowie announced he was to produce Devo's debut album "Q: Are We Not Men? A: We Are Devo!", he had to back out due to a touring commitment.
2. Which album cover features a picture of David Bowie in profile?

The picture used for the cover of Low was an altered still from the movie "The Man Who Fell To Earth", which Bowie starred in.
3. In 1975, David Bowie wrote the song "Fame" with Carlos Alomar and which other musician?

During the sessions for David Bowie's 1975 album "Young Americans", Bowie recorded two songs with his live band of the time and John Lennon; who sang backing vocals and played acoustic guitar. The first song was "Fame", and the second was a cover of the Beatles' song "Across The Universe".
4. Which was the first album to feature the full Spiders From Mars line-up?

Originally it had been Bowie's wish to write a musical based on Orwell's novel "1984", but when his wife rejected giving Bowie the rights, he started work on Diamond Dogs; with some of his work on the musical used in it (songs like "1984" and "Big Brother").
6. Which of the following guitarists played on David Bowie's 2002 album "Heathen"?

Pete Townsend plays on the song "Slow Burn" on "Heathen". He had also previously played with David Bowie on the David Bowie song "Becaus You're Young", which is featured on David Bowies's 1980 album "Scary Monsters (and Super Creeps)".
7. What was the name of theme tune David Bowie wrote to the 1986 film "Labyrinth"?

In total, Bowie wrote five songs for "Labyrinth", which he also starred in. The songs were "Underground" (the theme tune), "Magic Dance", "Chilly Down", "As The World Falls Down" and "Within You". Bowie performed on all songs except "Chilly Down".
8. Who produced David Bowie's 1995 album "1.Outside" with David Bowie?

When Eno and Bowie met up again in 1994, Eno suggested they worked on a new album together. He also played keyboards (but didn't produce) Bowie's Berlin Trilogy, made up of "Low", "Heroes" and "Lodger".
9. Which of these Jacques Brel songs has Bowie covered?

After being introduced to Jacques Brel through the work of Scott Walker, Bowie has often played the song live in the Ziggy Stardust and Outside tours. It was also featured in the "Ziggy Stardust and the Spiders from Mars" film released in 1983.
10. What was Bowie wearing on the album cover of "The Man Who Sold The World" album cover?

Bowie wore a Mr. Fish dress on the album cover of his 1970 album "The Man Who Sold The World". This proved a controversial decision for some, with the cover change to a pop art picture on its original US release, and to a Ziggy Stardust picture for its 1972 reissue.
Source: Author 100017266 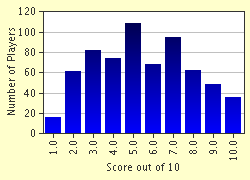 
Other Destinations
Explore Other Quizzes by 100017266