Quiz Answer Key and Fun Facts
1. Robert Fripp only plays guitar on one of the three albums. Which is it?

Robert Fripp plays guitar on 'Heroes,' and returns on 1980's 'Scary Monsters.'
2. Brian Eno, who collaborated with David Bowie on all three of these releases, was a member of a band that opened for Bowie and the Spiders from Mars on their 1972 tour. What was the name of Eno's band?

Brian Eno worked with Bowie and Visconti on these albums-- but he's not credited as producer. Harry Maslin produced 'Station to Station' and Ken Scott produced 'Ziggy Stardust.'
4. In what year was 'Low' released?

Bowie recorded these albums in Berlin, Germany. 'Lodger' was recorded in various cities: New York, London, Zurich, and Berlin. Since all three were recoreded at least partially in Berlin, these three albums are sometimes called 'The Berlin Trilogy.'
6. Which of the following tracks is NOT an instrumental track (music only-- no sung lyrics)?

'A New Career in a New Town,' 'Speed of Life,' and 'Art Decade' are all instrumental tracks that appear on 'Low'.
7. Which modern composer wrote symphonies based on the music of 'Low' and 'Heroes'?

Philip Glass wrote his 'Low' symphony in 1993 based on the tracks 'Subterraneans,' 'Some Are,' and 'Warszawa.' The 'Heroes' symphony was released in 1996 and bases it on 5 tracks including 'Heroes' and 'V-2 Schneider'.
8. Which of the three albums reached the highest chart position in the U.K.?

On 'Boys Keep Swinging', guitarist Carlos Alomar plays drums, while drummer Dennis Davis plays bass. Because of Davis' mistakes-- producer Tony Visconti added some of his own bass playing to fix the problem.
10. The songs 'Art Decade' and 'Weeping Wall' were originally written for the soundtrack to a movie. Which movie were they to be included in?


Answer: 'The Man who Fell to Earth'

While these tracks were originally written for the film 'The Man Who Fell to Earth,' they never made it into the film.
Source: Author SetsofWaves 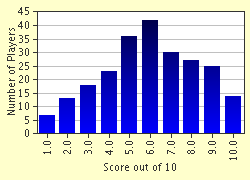 
Other Destinations
Explore Other Quizzes by SetsofWaves