How well do you remember the words of this great American songwriter of the Depression?


Answer: but believe it or not you won't find it so hot

This song was written for the album "Dust Bowl Ballads" (1940). Woody had not read the book "The Grapes of Wrath", but he had seen the movie, and he put the story into this song.
3. "There once was a _________ , she never was afraid, of goons and ginks and company finks and the deputy sheriffs who made the raid."

"Oh, you can't scare me, I'm sticking to the union, I'm sticking to the union, 'til the day I die." This song was written after Woody was criticized by Ina Wood, a Communist Party organizer in Oklahoma City, for having no songs about women in the labour movement.
4. Complete the lyric. "Who are these friends, all scattered like dry leaves? ______ "


Answer: the radio says "They are just deportees"

"Deportee (Plane Wreck at Los Gatos)". Written in 1948 as a memorial to the victims of a plane wreck in Los Gatos Canyon, California. Martin Hoffman wrote the melody about ten years later.
5. "Yes, as through this world I've wandered I've seen lots of funny men; some will rob you with a six-gun _______ "


Answer: and some with a fountain pen


Answer: for a dust bowl refugee

"Dust Bowl Refugee" (1938). Woody used to introduce this song "You know, there are different kinds of refugees. There are people who are forced to take refuge under a railroad bridge because they ain't got noplace else to go, and there are those who take refuge in public office..." ("Woody Guthrie: A Life" by Joe Klein, 1981)
7. "Mermaid Avenue" came out in 1998. It is an album of songs written by Woody Guthrie, with music by ________ ?

"Mermaid Avenue", by Billy Bragg and Wilco, was produced by Nora Guthrie, Woody Guthrie's daughter. "Vol II" came out in 2000.
8. "They sighed and cried, hugged and kissed, instead of marriage they talked like this ________ "


Answer: so long, it's been good to know you

As the 'dust bowl refugees' flocked to the cities and to California, they were met with increasing hostility by the townspeople. "Vigilante Man" 1938.
10. "When the sun come shining, then I was strolling, in wheat fields waving _________ "

You didn't think I'd leave this one out, did you? "This Land is Your Land" 1940. "One bright sunny morning in the shadow of the steeple by the Relief Office I saw my people - as they stood hungry I stood there wondering if this land was made for you and me."
Source: Author agony 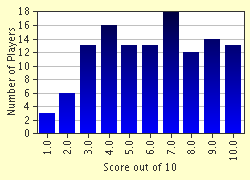 Related Quizzes
This quiz is part of series Songs of my Favourite Musicians:

A series of quizzes on songs by artists mostly on the Folk/Country spectrum.