Mark has a dog called Snoopy.
4. Who wrote the lyrics for 'Bop Bop Baby'?

Bryan wrote the song 'Bop Bop Baby' for his wife Kerry.
5. Who sings all the lyrics on 'Imaginary Diva'?

Kian, Mark, and Shane all come from Sligo in Ireland.
6. Which one of these songs is not on any of Westlife's albums?


Answer: 'What Would I Do Without You'

Westlife made a video for 'I Lay my Love on You' but never brought it out in the UK, as they decided to bring out 'When You're Looking Like That'.
7. What was Westlife's fourth single called?

'Seasons In The Sun' got to the number one spot.
8. Which two Westlife videos have been changed for America?


Answer: 'World Of Our Own' and 'Swear It Again'

Westlife is afraid of going to America in case their English fans will forget about them.
9. What single had the video starring many stars?

Westlife's video to 'Uptown Girl' featured stars such as the actor Ioan Gruffudd and Claudia Shiffer.
10. Which Westlife single got beaten to the number one spot by Bob The Builder?


Answer: 'What Makes A Man'

The only singles to have not gone to number one are 'What Makes a Man', 'Bop Bop Baby' and 'Hey Whatever'
Source: Author sweetheart1604 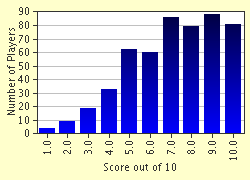 
Other Destinations
Explore Other Quizzes by sweetheart1604