Just select the word which completes the lyric of the song. All of these songs feature on the albums of Westlife. Good luck! x x x

From the song 'Swear It Again' from the 'Westlife' album.
3. 'And there's nothing left here to remind me, just a memory of your ______' - Can you complete this lyric?

From the song 'Against All Odds', which featured Mariah Carey. The song features on the 'Coast To Coast' album. It was originally a hit for Phil Collins in the early 1980s.
4. 'And my chances slipped away with each time I _______' - What did those Westlife boys do to make their chances slip away?

From the song 'When You Come Around' which is on the album 'World Of Our Own'.
9. 'All you have to do is close your eyes and just reach out your _______' - can you complete this song which Westlife covered?

From the song 'More Than Words' which is on the 'Westlife' album. This was originally a smash hit in the early nineties for the band Extreme.
10. 'You know I can't afford to buy her ______' - What can't Westlife's salary stretch to?

From 'Flying Without Wings', which appears on the album 'Westlife'. I thought this lyric was very appropriate because in late summer 2001, Bryan became the first member of Westlife to become a father, when baby Molly was born.
14. 'Funny how life can be so ________' - which word fits in here?

From the beautiful song 'Queen Of My Heart' which features in the album 'World Of Our Own'.
19. 'Together we've climbed hills and ______' - Can you finish this lyric?

From the song 'Every Little Thing You Do' from the album 'Coast To Coast'.
Source: Author Bronte 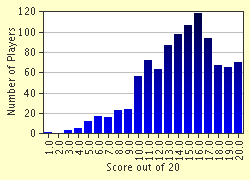 
Other Destinations
Explore Other Quizzes by Bronte