Luck Of The Irish Trivia Quiz

The Irish are lucky because they father Nicky Byrnes, Shane Filan, Bryan McFadden, Mark Feehily and Kian Egan, aka Westlife. Take this quiz to see if you know Westlife.


Answer: Queen Of My Heart

This powerful ballad reached the top UK positon. The single was taken off "World Of Our Own".
2. In 1999 in the UK, Westlife received record of the year for which single?

This was their first record of the year. They also won this award the following year for "My Love".
3. What was Westlife's first number one single?

This was their debut single and set them up to entering the "Guiness Book Of Records" for most consecutive number ones in the UK from debut. The single was taken off the "Westlife" album.
4. Which Westlife song was the first Westlife Single that did not reach number one in the UK?


Answer: What Makes A Man

This was the first single from their debut in 1999 that did not reach the number one position. It was their 8th single and was beaten by Bob The Builder's "Can We Fix It". The song reached number two in the UK charts.
5. Which song did Westlife record for charity?

This Billy Joel cover was recorded for the charity comic relief. It reached number six in the Australian charts during 2001.
6. In the 2000 Smash Hits Awards, how many awards did Westlife win?


Answer: Swear It Again and World Of Our Own

These two singles were the only releases in the US from the first 3 albums. Two Albums were released, "World Of Our Own" and "Westlife".
8. How many tracks on Westlife's "Unbreakable" album were previous not released on another album?

Unbreakable was their first new single released off this album. It reached the top UK chart position. The song "Miss You Nights" is a cover of the Cliff Richard track. "Tonight", "Written In The Stars", "How Does It Feel" and "Love Takes Two" are also new tracks on the album.
9. Which song have Westlife not recorded a cover version of?


Answer: Sorry Seems To Be The Hardest Word

This song was covered by the band Blue which featured Elton John who released this single previously. Westlife's version of the Extreme's song "More Than Words" is on their debut album. Cliff Richard's "Miss You Nights" is on Westlife's "Unbreakable" album. The powerful ballad "Angel" features on "Coast to Coast".
10. In "Unbreakable", who sings first out of the group?

"Unbreakable" went to number one in the UK. It was the first song released off the "Unbreakable" album.
Source: Author uptown_girl 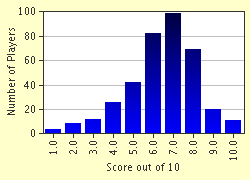 
Other Destinations
Explore Other Quizzes by uptown_girl