This is my quiz about Westlife's video clips. The questions are mostly in chronological order- there is one question about every clip (Except "Mandy" and "Seasons in the Sun" because I couldn't fit them). ENJOY!

Quiz Answer Key and Fun Facts
1. When Nicky flicks Shane's ear during the "Swear It Again Video", who is performing on the stage?

I love the confused look on Shane's face when he realises what Nicky's doing. Meanwhile, Kian's laughing himself stupid and Mark's just ignoring them and watching Bryan.
2. In the US clip for "Swear It Again", they're at the car wash having a water-fight and Shane tips a bucket of water over someone. Who is it?

They made this clip because they thought it would be more suitable for the American market. It didn't really work, but we were left with a video clip that (in my opinion) is so bad it's actually funny.
3. In the clip for "If I Let You Go", how many of the boys are wearing necklaces?

It's Bryan and Kian who are wearing necklaces. This clip is pretty cool if you didn't mind looking at cute guys with see-through shirts playing about in the water. :-)
4. What is Kian wearing in "Flying Without Wings" when they're all wearing white?

I love this song. I like the way that all their eyes look so much bluer than normal. (Except Shane because his eyes are brown.)
5. In "I Have A Dream", Kian steals something off a little girl during the last chorus. What is it?

This is a cover of the old ABBA song. It's a great clip with the boys lighting everthing up and making all the kids happy by giving them toys and stuff.
6. In the clip for "Fool Again", Nicky gives Shane a big hug. Who is standing on Nicky's right while this is happening?

I like this bit. It's a great clip too and was their fifth number one. It was shot in Mexico.
7. In "My Love", there is a clock behind the lads when they're at the train station. What time does it read?

In this clip Bryan nudges Shane when they're walking along the beach and says something to him. According to the boys, they're talking about the weather.
8. In "What Makes A Man", which of these things cannot be seen behind Kian when he's inside playing with the medicine balls?

This was the very first Westlife single that did not make #1. It made #2 and was beaten by Bob the Builder. I love the bit when Nicky arrives on the motorbike and takes his helmet off.
9. In "Uptown Girl", which button does the uptown boy press on the jukebox when selecting the song?

Their first choice is Bob the Builder, but they don't have it. This is a little in-joke because Bob the Builder beat Westlife for Christmas #1. This clip was done for Comic Relief and features a cameo from Claudia Schiffer.
10. When the lads are messing about in "When You're Looking Like That", one of them has a play on the drums. Who is it?

It's Shane on the drums and Nicky watching him. This song was never released as a single in the UK but it was released in other countries and shown on TV in the UK. This clip is great because it shows them dancing around in a studio and scenes from tours and signings and stuff.
11. In "I Lay My Love On You", Kian dives into the pool, then we are shown a couple of shots of the others, then Kian climbing out of the pool. Who is seen in the shots between Kian diving and Kian climbing out of the pool?

Nicky is shown chatting on his phone and Shane is shown messing about with an exercise belt in the gym. This song was also not released in the UK and features scenes from their time in Singapore.
12. In the clip for "Queen Of My Heart", Mark is seen sitting on a glowing cube. What colour is the cube?

This is the clip where Nicky decided to shave his head for no apparent reason. The other boys say they have no idea why he decided to do it.
13. In "World Of Our Own", the lads arrive in a big Hummer Jeep pursued by the police. What does the number plate of the Jeep say?

This is a good clip. I love Nicky's cane and hat and gloves, they look so cool. This was another #1 for the Westlife boys and is a great uptempo song.
14. There was a US clip made for "World Of Our Own". In this clip, what does Shane's shirt say?

This clip was made to attract more attention from the American market. The lads have said a few times that they really like this clip because they're dressed more casually. They wanted it to be more realistic so there's footage of them out partying and drinking with their mates.
15. In "Bop Bop Baby", Shane gets to ride a horse. What colour is the blanket under his horse's saddle?

This was the first self-written song that Westlife released and was written by Shane and Bryan. In this clip, they become musketeers and have to save a beautiful maiden from the evil Duke Vincent.
16. In "Unbreakable", what side is the girl's nose-ring on?

This clip was so sad. It was shot at Universal studios in the US. In the 'making of', Nicky was pretty chuffed because he and Kian had nicked a golf buggy and were driving around meeting celebrities.
17. In the clip for "Tonight", there is a couch that the boys take turns sitting on. Behind it, there is a blue neon sign with pink writing. What does it say?

This was the clip where Mark dyed his hair blonde. I hated it when I fist saw it but it kinda grew on me. Thank God he changed it back though. This song made it to #3 on the UK charts.
18. In "Miss You Nights", what is the last thing we see the girl doing?

All these things happened, but the glass shattering was the last of them. This is an old Cliff Richards song that appeared on the 'Greatest Hits' album. This is a really really weird clip.
19. In "Hey Whatever", a few people are seen holding or playing a guitar. Who is the last person seen with the guitar?

This clip was really fun and was the first song they released off their fifth album, 'Turnaround'. It made it to #4 in the UK.
20. In "Angel", how many times do we see Kian playing the piano?

You see him twice near the beginning and once near the end. This song was never actually released as a single but a clip was made anyway. It's a cover of the Sarah MacLachlan song.
Source: Author chooken 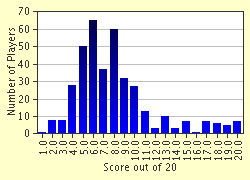 
Other Destinations
Explore Other Quizzes by chooken