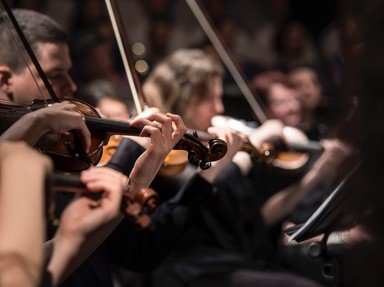 Who's that Composer? Trivia Quiz

In this Photo Quiz, can you identify these composers from their portraits? I've given you a few other clues as well!

Quiz Answer Key and Fun Facts
1. This nineteenth-century German composer's portrait emphasizes his artistic temperament, with his rakish hat and stylish cravat. He is best known for his operas, which include "Tannhauser", "The Flying Dutchman" and "Parsifal". Can you name him?

Richard Wagner (1813-1883) was one of the most acclaimed opera composers of his day, although during his lifetime he was almost as well known for his political views as for his music. His other works include the four-opera cycle "The Ring of the Nibelung".
2. This photograph shows the composer at the age of 47, only a few years before his death in 1911 aged 51. During his lifetime he was better known as a conductor, although his nine completed symphonies, including the "Resurrection" (No 2) and the "Symphony of a Thousand" (No 8) are now hugely popular and frequently performed all over the world. What is his name?

After his death, Mahler's music was performed relatively infrequently. However, in the years since 1950 his emotional, often anguished, music seemed to resonate with the zeitgeist of the second half of the twentieth century. Orchestras will now regularly programme performances of his works, secure in the knowledge that these will attract rather than repel audiences.
3. This serious looking man, with his unruly hair and frilled shirt, is surely one of the most famous and influential composers of all time. Straddling the 18th century "classical" and the nineteenth century "romantic" movements, he continued to compose even after becoming deaf during his later years. Who is he?

Beethoven (1770-1827) made important contributions across almost all musical genres, among them nine symphonies, five piano concertos, 16 string quartets and 32 piano sonatas. Even those with minimal interest in so-called "classical music" know his name, and most of them are able to identify the famous four-beat opening chords - "der-der-der derrr" - of his Fifth Symphony.
4. This Italian composer, well known for his operas such as "Rigoletto", "La Traviata" and "Aida", has a name which, if translated into English, becomes Joseph Green(s). True or false?

The individual in question is Giuseppe Verdi (1813-1901), which does indeed translate into English as Joseph Green(s). The formal portrait here is by Giovanni Boldini, and was painted in 1886, the year before the premiere of his penultimate opera, "Otello".
5. Who is the eccentric looking gentleman in this photograph, with his impressive fur collar, lorgnette perched on his nose, and flamboyant facial hair? A French composer of the 19th century, he is best known for his operettas such as "Orpheus in the Underworld" and "La belle Helene".

Offenbach (1819-1880) actually wrote almost 100 operettas, many of them single-act works, most of which are only rarely performed today, even in his native France. In later life, he longed to be taken seriously as a composer, and worked until his death on a serious opera, "The Tales of Hoffmann". Sadly, he did not live to see it performed, nor to witness its subsequent success across the world.
6. This composer looks the very model of an Edwardian English gentleman, with his impressive moustache and oiled hair - an image which he cultivated keenly. This photograph shows him in around 1900, shortly after the successful premiere of his orchestral "Enigma Variations" brought him national fame. What is his name?

One of the greatest of all English musicians, Elgar (1857-1934) was effectively self-taught as a composer. He was regarded as little more than a provincial note-spinner until his forties, when he followed the "Enigma Variations" with an equally acclaimed oratorio, "The Dream of Gerontius" (1900), and his First Symphony (1908).
7. This French composer may perhaps be hard to recognise from his photograph alone, but when I tell you that he wrote the suite "The Carnival of the Animals" (1886) and the opera "Samson and Delilah" (1877), you should be able to guess his name. Who is he?

Camille Saint-Saëns (1835-1921) was famous as an organist during his lifetime, and made more money from this than from his compositions. What is probably his most famous work, "The Carnival of the Animals", was written for private performance only. Saint-Saëns was worried that its light-hearted nature might damage his reputation, and refused to allow its publication until after his death.
8. This English composer perhaps looks more like a teacher or businessman, in his formal suit and round glasses. And perhaps that's not surprising, as he held the post of Music Director at St Paul's Girls' School in London from 1905 until his death in 1934. Best known for his orchestral suite "The Planets", who is he?

Gustav Holst (1874-1934), despite his foreign-sounding name, was born and raised in Cheltenham, Gloucestershire, his family being of Swedish ancestry. He was passionate about musical education, and at the same time as his St Paul's job, he was Music Director of Morley College in South London. His "St Paul's Suite" was written to be performed by the school's orchestra.
9. This nineteenth-century German composer made significant contributions to most of the major musical genres, including four symphonies, two piano concertos, a violin concerto, and much chamber music. He wrote no operas, however, his major vocal work being his 1868 "A German Requiem", which (as its name suggests) sets extracts from the German Lutheran Bible, rather than the Latin texts of most Requiems prior to this. What is his name?

Johannes Brahms (1833-1897) was very conscious of composing in the shadow of Beethoven, and did not complete and publish his First Symphony until 1876, well into his forties. One interesting bit of trivia is that Brahms made what is probably the earliest audio recording by a major composer, when in 1889 a recording was made of him playing one of his Hungarian Dances on the piano.

Although the recording still exists, it is in poor condition, and the piano is rather indistinct.
10. Possibly the most famous classical composer of all time, very few authenticated contemporary portraits exist of this man. The one shown here, by Johann Nepomuk della Croce, dates from around 1780, 11 years before his premature death only a few weeks after conducting the premiere of his opera "The Magic Flute". Who is this talented composer?

Wolfgang Amadeus Mozart (1756-1791) was a child prodigy, composing his first pieces at the age of five. His prolific output included symphonies, concertos, operas, choral and chamber music, and his influence on his successors was profound. But above all, his melodic gift ensures his continuing popularity.
Source: Author stedman 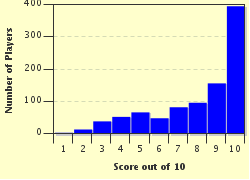