A to Z of Philosophers - 'A' Trivia Quiz

This is the first in a series of quizzes that looks at the lives and beliefs of a plethora of philosophers. First up the letter 'A' and St Anselm, St Thomas Aquinas and Aristotle. Enjoy!

Quiz Answer Key and Fun Facts
1. St Anselm (1033-1109) was a philosopher who lived a monastic life for many decades. Which of the following titles did this pious and successful man hold?

The philosopher and theologian St Anselm became Archbishop of Canterbury in 1093 and held the post until his death in 1109. Anselm had always wanted to lead a monastic life and from 1060 until his consecration at Canterbury he lived and worked in a monastery in the north of France.

St Anselm is considered the early founder of scholasticism which formed the basis of the scholastic theology and philosophy of St Thomas Aquinas. Scholasticism was the attempt to combine 12th century through 14th century theology with Greek philosophy.
2. Which of following arguments, known as the ontological argument, was proposed by St Anselm in response to concerned students over the existence of God?


Answer: "God exists because the concept of God exists"

"The true nature of reality ... must be that of an undivided, homogeneous, single entity" was a quote from an early philosopher called Parmenides of Elea. "Whenever we think we are doing something, God is really doing it for us" is a quote from the 17th century philosopher, Nicolas Malebranche. "The substance of God consisteth in nothing else but goodness" was stated by the 5th century philosopher, Boethius.
3. In which of the following French abbeys did St Anselm attain the rank of abbot in the year 1078?

St Anselm's rise through the monastic ranks was extremely fast and as such that reflected his commitment to Christian theology and subsequently his erudite interpretation of scripture and the development of his philosophy. St Anselm would eventually be released from his role of abbot at Bec Abbey (French: Abbaye Notre-Dame du Bec) which allowed him to assume the role of Archbishop of Canterbury in 1093. St Anselm died in 1109 in Canterbury, Kent.
4. St Anselm was an influence to the philosophy of one of the most important men in the field of Catholic theology, St Thomas Aquinas. What was the name given to the several proofs proposed by Aquinas that attempted to establish the existence of God?

The 'Five Ways' was the attempt of St Thomas Aquinas to prove the existence of God with the use of only pure logic. The First Way is a logical approach that is still very much used today and that is that for something to change, someone or something must have changed it.

This logic can be applied to the point of the very first "change" and then the possibilities suggested by religion and those suggested by science begin to diverge. St Thomas Aquinas suggests in his First Way that ultimately something must be the cause of the initial change and is thus the cause of all subsequent changes (almost like a chain reaction).

He also suggests that the source of the initial impetus, id est the first being or force to elicit a change in something, is not itself changed.

As Aquinas would put it "...if the hand does not move the stick, the stick will not move anything else" and the hand in the eyes of this respected theologian is God.
5. Between the years 1266 and 1273, St Thomas Aquinas worked on a massive collection of philosophical and theological works. What was the name given to this unfinished piece of literature that pondered over God, creation and morality?

The 'Summa Theologica' was far from a theological summary. In fact, it was a large work of literature that remained unfinished. This wasn't because St Thomas Aquinas died before its completion (Aquinas died in 1274, a year after the publication of the summary) but, because he had a vision which he believed trivialised everything he had previously written.

'Thus Spake Zarathustra' was a late 19th century publication of the philosophy of the controversial German, Friedrich Nietzsche, which included the concept of the 'Übermensch' or 'superman'. 'Conjectures and Refutations' was a book published in 1963 which documented the falsificationism of the philosopher Karl Popper. 'The Order of Things' was a 1966 publication by the French philosopher Michel Foucault which dealt with psychology and sociology.
6. Thomas Aquinas was canonised in 1323, nearly 50 years after his death, and from there on he would be known as St Thomas Aquinas. Who was the pope that was responsible for the canonisation?

Pope John XXII (Jacques d'Euse) reigned over the Vatican from 1316 to 1334. He canonised Thomas Aquinas who was later (1568) promoted to the rank of Doctor of the Church. This position, held by very few individuals, is only awarded posthumously and the recipient must also have been canonised prior to the promotion. It signifies that the holder of this prestigious title was of great importance to the Catholic church and by the new millennium only 33 people were recognised in this way.

Innocent VI held the title of pope for a decade dating from 1352 to 1362. Alexander VII resided at the Vatican from 1655 to 1667 and Benedict XV was the head of the Catholic church from the start of World War I (1914) to 1922.
7. There is no doubt that the Greek philosopher, Aristotle, revolutionised human thought on a variety of topics. Aristotle's philosophy, somewhat different to the style of Plato despite the latter being the former's teacher, had great influence on even 20th century philosphy. However, was Aristotle alive before or after the year 0? *See clue*

The fact that Aristotle was born in 384BC and died in 322BC makes his influence and intellect all the more remarkable. One of the very few people to make a lasting impression thousands of years after his death, Aristotle was initially educated at Plato's 'Academy' in Greece. Aristotle would later form his own institute of academia and that was the 'Lyceum'.

The Lyceum promulgated a form of philosophy that was affected by observation and it is at this point that the scientific method was believed to have been initiated.
8. Much of the work by Aristotle was influenced by the concept of teleology and from this he would go on to develop philosophies of, amongst other things, evolutionary biology. What is teleology the concept of?

From the concept of teleology comes the teleological argument for the existence of God. This argument suggests that as the Universe is characteristically ordered and functional there is evidence of design and subsequently a design implies a designer, id est God.

This is similar to another argument that attempts to prove the existence of God; the cosmological argument. The cosmological argument suggests that everything depends on something else for their existence (from the Oxford Dictionary of English) and therefore even such entities as the 'cosmos' must rely upon another concept that is independent of the cosmos. Again this is suggested to be God.
9. Aristotle was one of many philosophers (others being Confucius and Plato) who were interested in harmony. The philosophical idea of harmony in this context is being metaphorically equidistant from the two polar extremes of excess and deficiency. What was this middle point of harmony known as?

Aristotle was quite critical of the Spartans as he considered them extreme. An example given by Wikipedia is that the Spartans would train males for combat but not the women. Aristotle believed that their lack of the 'Golden Mean' caused them later difficulties. The 'Golden Mean' is also a concept seen in Buddhist philosophy and is known as the 'Middle Way' or 'Middle Path'.

Even in the modern age this policy of moderation is implemented or at least intended in western politics. An example is the formation of the New Labour party in Britain which is based on the political philosophy coined as the 'Third Way'. This is defined by contemporary social and political commentators as a compromise between capitalism and socialism. Whether or not New Labour are truly politically central is up to the perception of the individual!
10. Who of the following was responsible for 'Nicomachean Ethics'; a work which pondered over virtue and the psychological concept of happiness?

'Nicomachean Ethics' is probably one of the, if not the most, important pieces of work on the philosophical field of ethics. In the modern age the concept of ethics is as important as it has ever been particularly in the medical profession. Such questions as whether it is ever justifiable to perform an abortion or whether or not a doctor holds the right to promote and perform actions of euthanasia are all ethical questions that polarise society.

I hope you enjoyed the quiz. Thanks for playing!
Source: Author jonnowales

This quiz was reviewed by FunTrivia editor bloomsby before going online.
Any errors found in FunTrivia content are routinely corrected through our feedback system.
Most Recent Scores
Jan 28 2023 : Guest 24: 5/10
Dec 16 2022 : pixiecat: 4/10 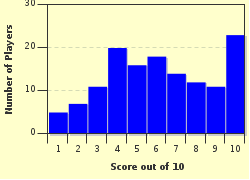