Share on Facebook
Share on Twitter
Share by E-Mail
Author
woordenboer
Time
7 mins
Type
Multiple Choice
Quiz #
137,199
Updated
Dec 03 21
# Qns
15
Difficulty
Tough
Avg Score
9 / 15
Plays
332
This quiz has 2 formats: you can play it as a or as shown below.
Scroll down to the bottom for the answer key.

Quiz Answer Key and Fun Facts
1. Who said: "There is no greater delight than to be conscious of sincerity on self-examination"?

Mencius VII-1, IV:2 (translation: James Legge). Mencius' only known work is a collection of sayings bearing his own name. In later centuries, millions of Chinese revered this follower of Confucius as a secular saint, second only to Confucius himself.
2. Who said: "Between father and son, there should be no reproving admonitions to what is good. Such reproofs lead to alienation, and there is nothing more inauspicious than alienation"?

Mencius IV-1, XVIII:4. Remarkable words for a conservative moralist. Mencius also called procreation the first duty owed to one's parents, so that marrying without their permission would be better than not marrying at all.
3. Who said: "Death, the most awful of evils, is nothing to us, seeing that, when we are, death is not come, and, when death is come, we are not. It is nothing, then, either to the living or to the dead, for with the living it is not and the dead exist no longer"?

Letter to Menoeceus, 125 (translation: Robert Drew Hicks). Epicurus was the most prolific writer of his time, but only a few of his works have survived: two collections of sayings, three letters, a note from his deathbed and his last will. His writings, controversial from the start, were not the stuff medieval monks liked to copy.
4. Who said: "If the people be led by laws, and uniformity sought to be given them by punishments, they will try to avoid the punishment, but have no sense of shame"?

Mencius would have agreed wholeheartedly. Epicurus preferred to live in a circle of friends, isolated from the political society that Aristotle idealized -- and actually called a person who could study nature without trivial worries equal to a god.
6. Who said: "It is impossible to live a pleasant life without living wisely and well and justly, and it is impossible to live wisely and well and justly without living pleasantly"?

Principal Doctrines, 5. According to Epicurus, the aim of life is to avoid pain and to enjoy pleasure.
7. Epicurus is a latinized form of the Greek name...

Epicurus, son of Neocles and Chaerestrate, grew up at Samos as a member of an Athenian colony. We know his life and most of his writings from the Roman writer Diogenes Laertius.
8. Mencius is a latinized form of the Chinese name...

Mengzi means Master Meng.
9. Mencius studied under a disciple of Zisi, a grandson of Confucius.

No doubt a fact he took great pride in. His book ends with the following complaint: "From Confucius downwards until now, there are only 100 years and somewhat more. The distance in time from the sage is so far from being remote, and so very near at hand was the sage's residence. In these circumstances, is there no one to transmit his doctrines? Yea, is there no one to do so?"
10. Epicurus was such a glutton that he vomited twice a day.

This was one of the rumors spread by his opponents, who mistook his hedonism for indulgence. In fact, his lifestyle was probably rather basic, and he wrote: "Nature's wealth at once has its bounds and is easy to procure; but the wealth of vain fancies recedes to an infinite distance" - Principal Doctrines, 15.
11. Whose statements are these? A. "All men have a mind which cannot bear to see the sufferings of others." B. "The tendency of man's nature to good is like the tendency of water to flow downwards."


Answer: Mencius said both A and B

A: Mencius II-1, VI:1; B: Mencius VI-1, II:2. Mencius believes man's nature to be good, as opposed to Xunzi, a later disciple of Confucius. Epicurus doesn't address this issue explicitly; he does define goodness as satisfying necessary natural desires, but he relies on reason to learn what desires are natural and necessary. Both thinkers fail to explain where unnatural evil comes from.
12. Whose statements are these? A. "Those animals which are incapable of making covenants with one another, to the end that they may neither inflict nor suffer harm, are without either justice or injustice. And those tribes which either could not or would not form mutual covenants to the same end are in like case." B. "In regard to inferior creatures, the superior man is kind to them, but not loving. In regard to people generally, he is loving to them, but not affectionate. He is affectionate to his parents."

A: Principal Doctrines 32; B: Mencius VII-1, XLV.
13. Whose statements are these? A. "Heaven does not speak." B. "It is pointless for a man to pray to the gods for that which he has the power to obtain by himself."

A: Mencius V-1, V:4; B: Vatican Sayings, 65. Mencius supported traditional religious rites, but he clearly attached more importance to benevolence ('ren'). Epicurus cleverly stated that the gods were infinitely good and happy, so they couldn't be bothered to interfere with mere mortals.
14. Whose statements are these? A. "If a man can prevent the evils of hunger and thirst from being any evils to his mind, he need not have any sorrow about not being equal to other men." B. "A man who only eats and drinks is counted mean by others, because he nourishes what is little to the neglect of what is great."


Answer: Mencius said both A and B

A: Mencius VII-1, XXVII:2; B: Mencius VI-1, XIV:5. It could just as well have been Epicurus. In his Letter to Menoeceus he writes: "Plain fare gives as much pleasure as a costly diet", "The greatest good is wisdom" and: "The misfortune of the wise is better than the prosperity of the fool."
15. Whose statements are these? A. "Friendship should be maintained without any presumption on the ground of one's superior age, or station, or the circumstances of his relatives. Friendship with a man is friendship with his virtue, and does not admit of assumptions of superiority." B. "Neither he who is always seeking material aid from his friends nor he who never considers such aid is a true friend; for one engages in petty trade, taking a favor instead of gratitude, and the other deprives himself of hope for the future."

A: Mencius V-2, III:1; B: Vatican Sayings, 39. The most conspicuous correspondence between these two thinkers is their celebration of friendship. Epicurus went so far as to withdraw from public life, living with his followers in a commune called 'the Garden.' In China all philosophers were political consultants, but after a career with ups and downs Mencius also spent his last years teaching his disciples.
Source: Author woordenboer

This quiz was reviewed by FunTrivia editor thejazzkickazz before going online.
Any errors found in FunTrivia content are routinely corrected through our feedback system.
Most Recent Scores
Jan 19 2023 : steelman86: 7/15
Dec 08 2022 : skatersarehott: 3/15 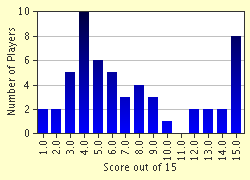 
Other Destinations
Explore Other Quizzes by woordenboer